The barrel has sunk

The Rotary barrel has plunged to the bottom for this year. It happened shortly after 3 p.m. April 10.
This is the earliest it has ever sunk since the contest began eight years ago. The latest ever was May 11 in 2014. See the full range of dates and times at www.endofwinter.ca.
Congratulations to this year’s winner Liz Lorinczi, whose 2:20 p.m. prediction came closest.
Thank you to all who supported the Rotary Club of Sioux Lookout’s barrel sinking contest. All money raised will be used for Rotary projects in Sioux Lookout.
BIG Thank You to Liz Lorinczi for donating her winnings to the community Food Bank!
Dick MacKenzie, Rotary Club of Sioux Lookout member 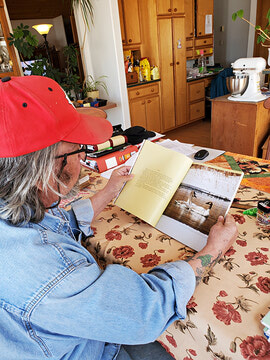 Dick s Hideaway: Six weeks in the bush
March 31 last year I set out with my dog Grace, pulling a small sled with a few supplies, for camp to stay until ice out...