The Sioux North High School (SNHS) Warriors Girls Hockey Team ended their final home game of the regular season with a 6-2 win over the visiting Beaver Brae Secondary School Broncos in an emotional evening at the Sioux Lookout Memorial Arena on March 27.
In a special pre-game ceremony, the team was joined on their blue line by the Warriors Boys Hockey Team to pay tribute to their teammate, Grade 9 student #10 Sierra Hoppe, who passed away suddenly on February 26.
A representation of Hoppe’s jersey was unveiled on the scoreboard wall and a moment of silence was held in her honour.
Prerecorded remembrances of Hoppe from her teammates were played over the arena’s speaker.
Warriors Head Coach Jason Murphy said it was important to the team to include the boys hockey team in the ceremony honouring Hoppe, “This year the boys and the girls teams have supported each other at each other’s games wearing their jerseys in the stands and cheering each other on. It’s been really nice to see the bond that has developed on our team, but also between the boys and girls teams.”
Between the girls game and the boys game earlier that afternoon, $1643.30 was raised through program sales and a free will donation collected at the door for a SNHS Bursey in Hoppe’s honour.
Admission to the game was free thanks to the support of the Municipality of Sioux Lookout, The Sioux Lookout Chamber of Commerce, and The Sioux Lookout Bombers Jr. A Hockey Club.
Murphy said following the game, “I thought the girls played hard. We had to fight through some emotions in the first period and a little bit of a slow start, but as each line got out and got a shift under their belt they started to come around and started playing a little better.”
He added, “With our opening ceremony and tribute to Sierra, certainly with Matt, Jenna (Sierra’s parents), and Ava (Sierra’s sister) in the building, it was a little extra special to get the W tonight for sure.”
He shared, “Sierra was the type of player that every coach loves to coach. She was quiet in the dressing room, which is not uncommon for a Grade 9 student, but you could tell that she loved playing hockey. She loved being a Warrior. Worked hard every single practice, every single game and like I said, the type of player every coach loves to have. Pretty devastating news and it was really tough on the girls, but the girls did a really good job of coming together and supporting each other and helping support the family as much as we could.”
The team has added patches to their jerseys in Hoppe’s honour displaying Number 10 and the words “Forever A Warrior.”
“They will stay on the jerseys until the Grade 9 class graduates and then of course the Number 10 sign that’s up in the arena, that will be there years and decades to come,” Murphy explained.
Goal scorers for the Warriors during the game were Team Captain Haylee Bouchard with a hat trick as well as McKenzie Kakepetum, Sophia Legary, and Courtney Southwell.
Bouchard said it felt good to get the hat trick, “Especially with everything happening before the game.”
She said getting a win in front of the hometown crowd was really nice, adding, “It was good that the girls kept their heads in the game. I know it was tough right after the ceremony we had for Sierra.”
Goaltender Presley Brohm backstopped her team to the win.
She said of the victory, “It was really, really nice. All of our rookie players have improved so much.”
She added, “Got to give it to Haylee. She’s always on point for all the games.”
Murphy said the team has come a long way this season, “We started the season with a lot of young players. I think we have close to eight or nine Grade 9s and 10s and some girls that have only been playing hockey for a year or two. Bit of a rebuilding year I would say. At the beginning of the season, watching the team develop, watching the players develop individually and come together as a team, they’ve certainly impressed the coaching staff and I think you hear lots of positive comments around the town and around the community about how well they’ve been playing from where they started in September to where we are right now.”
The team played the Dryden High School Eagles on Monday night in their final regular season game.
“The standings are pretty tight at the top between Dryden and Fort Frances,” Murphy said of the playoff picture for the league. “It looks like we are going to be playing either Fort Frances or Dryden, but likely Dryden on Wednesday. It’s a one game semi-final this year. Winner moves on to the finals for a best of three (series).” 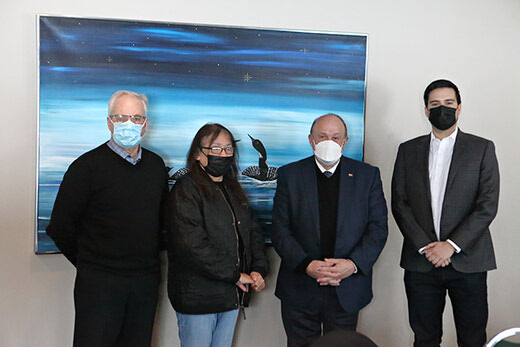 The provincial government is investing $4.2 million through the new Addictions Recovery Fund to help people dealing with addictions in Sioux Lookout and surrounding area...