The provincial government is investing $4.2 million through the new Addictions Recovery Fund to help people dealing with addictions in Sioux Lookout and surrounding area.
On March 15, Michael Tibollo, Associate Minister of Mental Health and Addictions, met with community stakeholders in Sioux Lookout at the Forest Inn and Conference Centre to hear their stories, successes and concerns as he made the announcement.
The funding will be provided to the Sioux Lookout Friendship Accord Economic Development Corporation to expand access to a total of 37 new addictions treatment beds.
The province shared the funding will provide access to 15 new addictions treatment beds, 16 supportive treatment beds, and six withdrawal management beds.
The Sioux Lookout Friendship Accord was founded in 2017 and is an agreement between Cat Lake First Nation, Lac Seul First Nation, Slate Falls First Nation, and Kichenuhmaykoosib Inninuwug First Nation, as well as the Municipality of Sioux Lookout.
Jacob Dockstator is the Executive Director of the Sioux Lookout Friendship Accord Economic Development Corporation.
He shared, “We’re looking to a couple of organizations in the area to provide different proposals on how we should move forward with the location. As you know there’s fairly limited space in Sioux Lookout… So, we’re looking at a couple of different options in the area.”
Asked about a timeline to establish the 37 bed facility and get it operational, he shared, “We are looking to have people in the facility this fall. It wouldn’t be a new build. We’re not considering any new builds. It would be an existing building or renovation.”
Addictions Recovery Fund investments in Sioux Lookout will be allocated over the 2022-2023 and 2023-2024 fiscal years.
Inspector Karl Duewel, Sioux Lookout OPP Detachment Commander shared with Tibollo, “I think the mental health issues that we deal with in this community are known to most of us. From my point of view, a lot of it leads back to addiction, which leads back to historical trauma and injustices that were faced over many, many years. Since I’ve been in this role, I’m really trying to raise that awareness that since I’ve been here, the last 20 years, the way that we’ve been dealing with these social issue is inappropriate. We are, unfortunately, being left with no other option than to put these individuals that are highly addicted in cells, in cages every night and that needs to change. Many of these people have committed no criminal offense other than the fact that they’re drunk in public. And then they sleep in a cage every night where there is no hope of every breaking out of that cycle. We are doing everything that we can, in the meantime until opportunities open.”
Susan Barclay, Out of the Cold shelter Executive Director shard that Out of the Cold was established about 25 years ago to try and keep people from freezing on the street.
“We’re actually only funded to give people a place to stay… but there’s been such a gap in service in this community that we have stretched and found ways to keep the doors open.”
James Morris is the Executive Director of Sioux Lookout First Nations Health Authority.
He too spoke to a gap in services in the community for those battling addictions.
“I’ve seen people gain so much pride in the simple fact that they’ve gone to treatment centres and completing the six-week program or whatever it is and then when they graduate, suddenly realizing that that’s just the first step. There’s no help after that. They need ongoing help.”
He added, “After they come out of treatment, they need help after that. They’re just at first base. They still need to get to second base, third base, and finally home. Home is, to me, that’s the end of treatment. They’re on their own then. You’ve healed that person. I know people who have been to treatment centres five or six times.”
Program Manager of the Mental Health and Addictions Program (MHAP) at Sioux Lookout Meno Ya Win Health Centre (SLMHC), Michelle Turner shared, “The volumes of patients that we see here with these concerns far exceed volumes in most of the other towns and cities in our region. We’ve been struggling for a very long time trying to get people appropriate access to addictions services.”
She further shared, “Within the past few years, we have been offering withdrawal management services… that we’re just not able to sustain because we need the beds that we have for acutely ill medical patients that have to be prioritized and it has been really, really hard for us and for everyone in the community.”
Turner added, “It would be really great if whatever comes of this involves one door access. So again, while we all have these really fantastic programs, a lot of times patients, specifically from northern communities, from here, and also organizations, have trouble figuring out how to get into where they need to go.”
Duewel stated following the meeting, “Michelle Turner mentioned it, there is a demonstrated success in this region with a (one door access) detox sobering centre. It is the Morningstar Program in Kenora. That just goes to show, with the reductions that they’ve been able to have in their lodgings at the police station, how successful a program can be if the right stakeholders come together and work together.”
Sioux Lookout Mayor Doug Lawrance concluded, “Funding that supports facilities, programs and services which address mental health and addictions challenges in Sioux Lookout is critically important and welcomed. As well as in-community needs, our role as a hub community multiplies issues in Sioux Lookout and underscores that services need to be culturally appropriate. This funding can only improve the opportunity for all of us to live with dignity.” 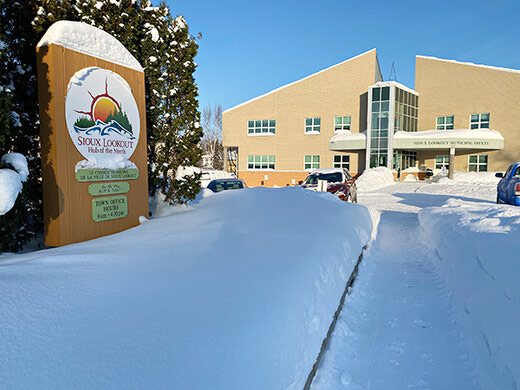 Water and wastewater rates in the Municipality of Sioux Lookout are on the rise...