Vehicle maintenance for a safer spring

Vehicle maintenance is vital for the safety of individuals and their families, as well as a good investment for the vehicle, which goes a long way in keeping it up and running, said Madsen GM Service Advisor and technician Erik Hoey.

Aztak Auto Technician Rick Jaworski shared the importance of following the vehicle manual in a timely maintenance. “Every vehicle has different things to do at different times, and it is very important that you do check your manual to verify what has to be done at certain times.”

“It’s always good to do oil changes on time. We have a lot of cars nowadays that have extended intervals, but being in Sioux Lookout, we do a lot of short distance driving. We may have to do the oil changes prematurely, as far as your manual says, or your message tells you from the vehicle. There are also winter tire changeovers, which gives the garages an opportunity to check the vehicle over completely. So, it’s a good time to get into the shop and maybe do your oil change, change your tires and do general check-over on the vehicle. Always good to check tire pressures, that is stuff that you should be checking at all times,” said Jaworski.

Hoey advises a multi-point inspection in the spring and fall of each year. He said, “Some things that people don’t always think about is checking your alignment, because tires are quite expensive and our roads can really knock over alignment quickly. As well as the age of the tires, something people don’t usually think about either. But, they are made of rubber, and rubber does degrade over time, again, going back to safety.”

The salt used on highways often contributes to increased rusting and corrosion, which can be minimized by getting some kind of undercoating on the car, suggests Jaworski. “There’s a lot of different companies out there that do undercoating, and it literally makes your vehicle last twice as long in our neck of the woods here.”

Jaworski said that sometimes it may take a few attempts to accurately verify what an issue may be. “The complexities of finding certain noises that a driver can hear, but sometimes the shop can’t hear, because we’re not driving your vehicle and familiar with that vehicle as much as the customer is. So, sometimes vehicles get scared when they get close to a shop and all of those noises go away,” he added.

Hoey said people with boats that are constantly in and out of the water may have a greater chance of the gear oil becoming contaminated with water, which must be serviced.

“Other than that, when the summer heat comes in, it’s the AC season, and it’s always a good idea to get it sooner than later, because, the AC machines are few and far between the dealerships and the shops. So, they are usually booked for weeks. And once it is 30-40 degrees, you don’t want to wait two weeks for that AC to be working,” said Hoey.

It is also the time of the year when we begin to share the roads with motorcyclists. Jaworski said that motorcycle engines are the same as car engines and require timely maintenance. He stressed reading and following the manual as best practice. He added, “Considering you only have two wheels that save your life on a motorcycle, it’s even more important that your tire pressures are checked.”

Jaworski reminds people to be mindful of sharing the road with motorcycles. “We have a little saying, take a second and double check. Because when you are not looking for a motorcycle, it’s really easy to overlook. Because there’s only a single headlight on a motorcycle and it takes up way less of the highway. It is so easy to overlook someone coming up on a motorcycle, whether they are behind you, or you are about to pass, and you are not double-checking your blind spots, or when you’re at a stop sign and you’re pulling out. Most cases of motorcycle injuries are because people pull out in front of the motorcycle. So, it is very important that you train your brain to look for that single headlight on a motorcycle,” he added.

With spring having set in early this year, and the ice clearing out sooner, it is vital for boat owners to ensure the maintenance and safety of their boats before they hit the water, advise local boat experts.

Mascotto’s Marine Service Manager Peter Breton advises people to watch out for any nests that may be built up over the winter, followed by a thorough cleaning, to begin with. He added, “Then, you want to check your engines, initially for oil and the belt conditions. Lots of them have alternator belts, almost like a car. And if you hadn’t done it in the fall, oil and fuel filter change is also recommended, along with checking your bottom end gear oil, to avoid damage.”

Dingwall Motors Sales Manager, Derrick Sawdo said that this is a good time to check your batteries and bilge pumps, making sure they are in working condition. “A bilge pump pumps out water, so if you had a leak in your boat kind of a thing, that will pump the water out of the boat. So, always make sure your batteries are charged. That way, if you have to run that bilge pump for an extended time, you can.”

Sawdo reminds people to ensure that their safety kits are complete, and flashlight batteries replaced. He added that among other things, safety kits also consist of a bailing bucket and a rope, that especially come in handy to tow the vessel or reach out to a person, if required.

With fuel sitting in the boat throughout winter, Breton said that it is advisable to start with using fresh, premium quality fuel. He added, “The other thing is checking the propeller and the skeg for any damage; stuff you’d want to get fixed before you head out. Then, of course, you want to make sure your battery is fully charged. Ensure good, clean, connections on the cables, and another good point, if you’re disconnecting batteries and hooking up batteries, is, always install your positive cable first, and your negative cable last. This has less chance of arching and damaging any electrical components. And while you’re doing that wiring check, install your electronics that you probably would have removed during winter. Check your transducer, the unit that hangs down on the back of the boat for your fish finder…it’s something that could easily get damaged, so, something to check for.”

“It’s always a good idea, if you are doing your boat maintenance yourself, to check underneath the propeller. So, pull your propeller off, and mainly, you’re looking for a fish line that might be caught behind there, and what the fish line does is, it wears all those seals behind the propeller, and you could lose your oil on the lower unit. If that happens and if you don’t have any lower unit oil, your engine will seize in about 20 minutes,” Sawdo said.

Breton said that people often tend to overlook the trailer, which is also an important component of safety. He said that it is important to check the trailer for tire pressure, bearing grease, functioning lights and any loose parts. Breton also suggests people check if the motor is effectively pumping water, to avoid issues with overheating.

Breton said, “Last is to make sure, when you do launch, you plug-in the boat, because I see numerous times when people are happy to go fishing for the first time, and the boat starts sinking, they may not always remember to make sure they are plugged in.”

Breton suggests for those who may find this maintenance a little overwhelming, to reach out to any shop for assistance. “About half hour labor, and you could get most of this work done.”

Sawdo also reminds people to be mindful and aware of sailing regulations and routes, especially narrow chutes, like the Minnitaki chutes, where down traffic has the right of way. He said, “Wear your life jackets and be safe on the water.”

The warmer temperature is also getting more people out on their bikes. Doug Vinkle, who repairs and rebuilds old bikes in town, shares that it is a good idea to check for the tire’s air pressure, and any evident cracks that may be forming between the tire threads.

“A lot of people under inflate and that’s not very good for the bike. As far as the brakes, test them, look at the brake shoes, and make sure they’re not worn down too far. Lubricate the chain, that’s the most important thing about lubrication. Nothing else really matters that much. It all works fairly automatically. Unless it’s a serious business, which I could take care of,” said Vinkle. “We’re getting great weather for biking. Get on your bike, get on your feet and enjoy what we have.” 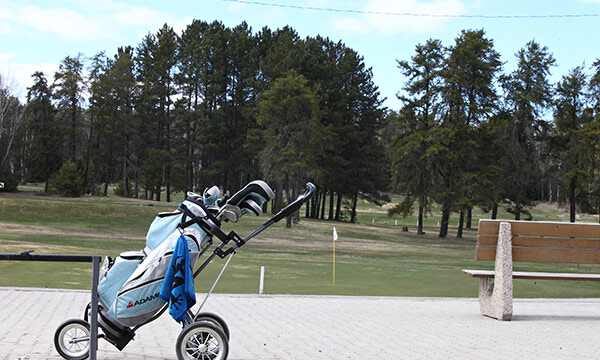 The Ontario government strengthening enforcement of the province s stay-at-home order, aiming to curb the rapid growth in COVID-19 case rates, has elongated the wait for golf enthusiasts to get back on the course...