Striving to provide a safe space to socialize, help practice public speaking, and improve communication and leadership skills, the Siouxper Speakers Toastmasters Club held its Christmas meeting on December 17. The Acting Director of Membership and a long-standing member of Toastmasters, Stuart Cummings, said, “In the culture that we live in, Christmas is an important holiday. It doesn’t matter what’s your background…you are welcome to celebrate in your own way. As Toastmasters we wanted to celebrate Christmas too. It’s a time when we can give to each other, reach out to each other, and give gifts, just a gift of friendship, a gift of being able to learn to express yourself.” Cummings said, “In Toastmasters, we always like people to feel welcomed and comfortable and know that they are a part of something. It is one thing to come to a meeting and sit through a meeting and never feel a part of something. You don’t really get into it. But when you have a chance to be heard, to be understood and to be appreciated, it makes you desire to come back, makes you want to find people who you can relate to.”
Marshall Lewis, who has been a member of Siouxper Speakers Toastmasters for almost a year, said that he joined the club with a desire to improve his public speaking skills, to become more comfortable talking in front of groups. He said, “It’s really helped. I can tell I’ve been making improvements. The feedback’s been great. People have been giving me feedback and I need to work on certain things. I realize those are my weaknesses in public speaking and so I want to continue coming and working on those things to improve.” He added, “Just from the Toastmasters meetings, I’m able to tell that I’ve become more comfortable and have less anxiety when I get up in front of the room to speak.”
Cummings explained that their meetings are quite casual, similar to their Christmas meeting where people could get to know and celebrate with each other. The meeting concluded with some Christmas special refreshments of sweets and juice for all attendees.
Jitendra Bhavsar, who was attending a Toastmasters meeting for the second time, said, “It’s really nice to be here. We meet new people, make friends. We get a chance to express our thoughts, our feelings, our experiences, and I like that. All are mature and friendly people. They talk nicely, they try to help each other and I like that.” Trudy Cummings, who recently became a member of the club in September, added, “It was very laid back and fun. It was enjoyable. I needed the laughs and it was good company.”
Toastmasters has been delivering its services and support to the community of Sioux Lookout for over 15 years now. The current group of six members calls upon anyone interested to join the club.
With the first unofficial meeting held in 1905, Toastmasters began as a series of speaking clubs. According to the Toastmasters International’s website, it was initiated by Ralph C. Smedley, the Director of Education at the YMCA. Upon noticing a need for the men in the community to learn how to speak, conduct meetings, plan programs and work on committees, he wanted to help. The organization was officially established in 1932, as a California non-profit organization, from where it began to grow internationally.
Toastmasters require groups to maintain a minimum of eight members to maintain their charter. “We currently have six people and we have three or four others who have been coming out and attending and who are thinking of becoming members. They just haven’t gone through the process yet. I’m confident we’ll keep our charter,” Cummings explained.
“People can join by coming here. January the 14th is our next meeting,” he said. Anyone interested in joining the club can email Cummings at [email protected], reach out to him via Facebook, or walk-in, wearing a mask, to the next Toastmasters meeting to be held at 7 p.m. on January 14, at Calvary Baptist Church. 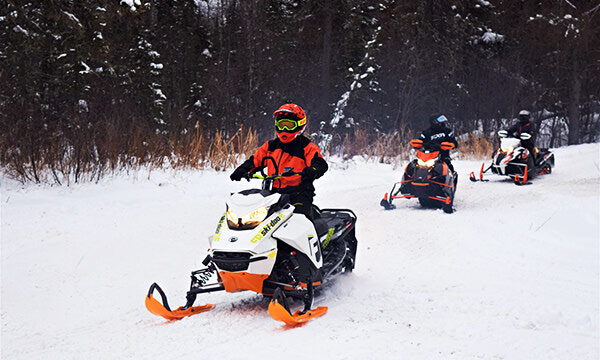 Opening snowmobile trails in and around Sioux Lookout is taking longer this year as members of the Ojibway Power Toboggan Association (OPTA) wait for ice to thicken on area lakes and waterways and for more snow to fall.
OPTA Vice President Andrew...