The Sioux Lookout Makwa Clan Patrol held its first patrol, a training exercise, last Sunday (Oct.6) afternoon, visiting the area around the water tower in Sioux Lookout.
Modeled after Winnipeg’s Bear Clan Patrol, the Sioux Lookout Makwa Clan Patrol aims to have a positive impact in the community.
Darlene Angeconeb, Acting Director at Equay-wuk (Women’s Group) and Chair of Sioux Lookout’s Police Services Board explained, “They’re going to be looking for materials to keep the community safe, picking up dangerous materials like needles and things like that. We’re also going to be patrolling to make sure people are safe. So if we see someone who might be sitting there, maybe they look like they’re not feeling too good, we’re going to ask them how they’re doing. It will be like a wellness check. We’ll talk to them. We’re not there to get people in trouble. We’re there to make sure they’re well and that they have a place to stay, or that they’ve eaten.”
She explained further, “If a person is downtown because of a domestic violence situation, we have to know what’s happened with them and what’s going to happen with them. If they’ve been raped maybe we’ll try to talk to them about that and see if they need any kind of medical help or a ride to the hospital.”
Angeconeb said she’s happy to get a patrol up and running in town before winter.
“I think one of the main purposes behind the patrols too is to prevent people from freezing to death if they pass out. I was working here late one night and I went outside when I was smoking and had a cigarette and there usually are a bunch of recyclables in the corner outside here and I saw something there and I thought I saw it move. The closer I got, I realized it was actually a person sleeping there. So I came upstairs and made a phone call to 911. Went back downstairs and tried to tap him on the arm. He was okay. The police came and they picked him up. If I had not been working that night, he would have frozen outside,” she recalled.
On Oct.1, people interested in volunteering with Sioux Lookout’s patrol met to receive a presentation on harm reduction, receiving Naloxone and safe needle disposal training from Kaitlyn Roen of the Northwestern Health Unit.
Routes, frequency of patrols, locations to focus on, and resources to secure were all discussed.
Angeconeb said the patrol would like to be able to hand out sandwiches, fruit, granola bars, and juice boxes to anyone they meet who could use them.
The patrol is hoping local businesses and organizations will step forward to support their efforts through donations.
The Municipality of Sioux Lookout and the Sioux Lookout OPP have already stepped forward to offer their support Angeconeb said.
The frequency of patrols is still being determined. Angeconeb is hoping more people will come forward to volunteer with the patrols.
The intent is to patrol in groups, she said. “It would be nice to get a mixture of males and females within the groups.”
“Eventually I would like to see us get some kind of non-violent intervention training on how to handle and defuse situations that we might meet up with,” Angeconeb stated.
She added, “We also talked about the youth in Sioux Lookout. They tend to be out on Friday nights, so we’re thinking a youth patrol of some kind should be developed.”
Anyone who can help out the new patrol, either as a volunteer or by way of donations, can contact Angeconeb at People can contact Angeconeb at 737-2214 or [email protected]
Asked about the patrol’s name, Angeconeb said Makwa means bear in Ojibway and Oji-Cree. The name was proposed by Sioux Lookout Mayor Doug Lawrance, who has volunteered to be a member of the patrol.
The next patrol in Sioux Lookout will take place on Oct. 19. 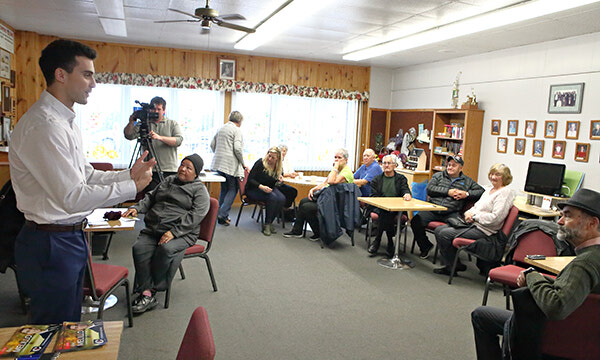