It was a day to recognize and celebrate the heritage, culture and contributions of Indigenous people at Sioux Mountain Public School and Sacred Heart Catholic School on July 21, as students recognized National Indigenous Peoples Day.
At Sioux Mountain, students took part in an outdoor “playday” style event featuring traditional First Nations sports, crafts, songs and foods. One of the event’s coordinators, Educator Suzie Hughdie, described the day’s activities, stating, “We wanted to celebrate Indigenous Day with our students and also with our families as we haven’t been able to do that much over the past two years. So, it was just really great to be celebrating together.”
Commenting on what activities the students were able to participate in, Hughdie added, “We have lacrosse, woven bracelets, this is a game of tag we called Tatonka, and then there’s a Freezie station where the kids need to order their Freezies using Ojibway colors.”
The day was divided by grade with the morning being for Kindergarten and Primary students, while the afternoon saw the Junior and Intermediate classes taking part.
Hughdie continued, “It’s just a day to have fun. In other years we’ve gone to the hospital but even though we aren’t there this year it’s nice to be outside. It was fun, the kids really loved it, saying ‘this was the best day of the year!’”
At Sacred Heart, part of their recognition of National Indigenous Peoples Day came on June 14 when the school hosted an Indigenous Culture night, which ran from 5-7 p.m. and saw approximately 170 people attend over the course of the evening, with Emily Hamilton, Sacred Heart School Principal, noting, “We had teachings on the drum, traditional medicines, traditional dress and dance. We had painters, beaders, and more. Sacred Heart Staff made about 10 crockpots of chili. The Friendship Centre supplied the ingredients and also brought bannock. Our student leaders greeted families as they came into the school. Our students also enjoyed serving the meal. This was the first big event we hosted since reopening our doors to the public after the series of lockdowns. We look forward to seeing where our partnership takes us.” 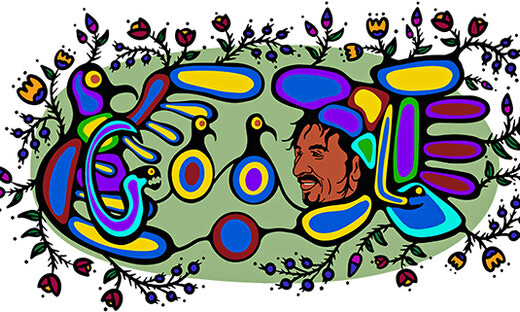 Norval Morrisseau gets Google Doodle, with some help from artist with local ties
Tuesday, June 28, 2022
0 comments

Blake Angeconeb, a member of Lac Seul First Nation, has been making waves in the art community with his works which often combine traditional Woodland style with pop culture references...