Rotary Club of Sioux Lookout members have been recognized over the years for their annual contributions and donations to the Rotary Foundation.
Rotary members who contribute, or have contributions made in their name, of $1,000 to the Rotary Foundation receive a Paul Harris Fellow recognition. Currently, most of the Rotary Club of Sioux Lookout members are Paul Harris Fellows.
“Sioux Lookout as a whole never ceases to surprise me with their generosity. As for the members of our club, we presently have 19 members and 13 of them are Paul Harris Fellows. When I look at our Rotary Club, I see a lot of people involved in a lot of different fundraising activities not only within Rotary, but in the community-at-large,” said Rotary Club of Sioux Lookout President Tara Drew.
“When you donate your first thousand dollars you’re a Paul Harris Fellow. When you donate your second thousand (dollars) you become a Paul Harris Fellow plus-one, which actually means two, so Lorenzo (Durante) is actually a Paul Harris Fellow plus-five. I’m a Paul Harris plus-three, and I’m also a Paul Harris Society member. I have committed to give a thousand-dollars U.S. a year for ten years, in which case I get recognized as a society member. Once you hit ten-thousand-dollars you’re considered a major donor,” she explained.
Sioux Lookout Rotarian Lorenzo Durante said there are options that contributors have when making a donation, which can end up with money coming back to the district and to the local Sioux Lookout club.
“You have a couple of choices when you make a donation. It’s a thousand dollars U.S. so you have a couple of choices. In our case, the eradication of polio is one of Rotary International’s projects, and they’re in partnership with the World Health Organization and the Bill and Melinda Gates Foundation. Rotary has specified one area, and the other area to help our district is called the Annual Fund. When you donate to the Annual Fund part of those dollars come back to our Rotary district, so we can have access to those dollars. If our club wants to ask our district, through a grant form or application, you can apply for certain projects that you want to do for your personal club here in Sioux Lookout, so we’ve been doing that,” said Durante.
“The last few years we’ve been getting dollars to help us for our bursaries for high school graduations, so we’ve been successful with that. We’ve been successful in gathering dollars to help with our International Youth Camp,” he said.
“We’ve used our grants to support the high school and the cafetorium, we supported the hospital, and we also support international projects. We support a university in Peru that’s training osteopathic practitioners,” said Drew.
Durante said he likes knowing, through Rotary International, where his donations are going through a narrowed-down range of needs and projects.
“Rotary International has narrowed their scope into six areas of need, so you know your money is going to certain areas. It’s international projects like clean water in certain areas of the world, education programs for children in schooling, and fighting other diseases like malaria, so you know it’s going to other projects around the world and you know it’s doing some good,” he said.
“This is how I contribute. We all donate to our churches, the (Canadian) Cancer Society, and Heart and Stroke (Foundation of Canada), so this is one of my donations,” he added.
Rotary International shares, through their website www.rotary.org, “Rotary established the recognition in 1957 to encourage and show appreciation for substantial contributions to what was then the Foundation’s only program, Rotary Foundation Fellowships for Advanced Study, the precursor to Ambassadorial Scholarships.
“Many other notable figures have been named Paul Harris Fellows, including U.S. President Jimmy Carter, Russian President Boris Yeltsin, U.S. astronaut James Lovell, UN Secretary-General Javier Perez de Cuellar, and polio vaccine developer Jonas Salk.
“The number of Paul Harris Fellows reached the 1 million mark in 2006.”
For more information about the Rotary Club of Sioux Lookout, visit their website portal.clubrunner.ca/992. 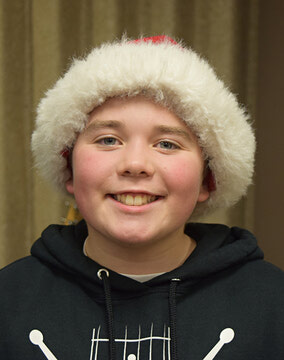 Question of the week: Are there any holiday or New Year’s wishes you would like to share?