Local resident Pat Beaudoin had more than a bit of luck when she matched the last six of seven Encore numbers in the January 8, 2022, Lotto 6/49 draw, taking home a prize of $100,000.
Beaudoin explains, “Out of habit, I pick up a Lotto 649 Classic Pack every one or two weeks, at Joe Carbone’s Sioux Lottery Centre. By the end of February, I had quite a stack of them built up to check the numbers. About the 4th ticket down in my pile I noticed a lot of zeros come up and my immediate thought was ‘oh, that can’t be right’.”
After some disbelief, and confirmation from a store employee, the reality began to set in.
Beaudoin continued, “The winning ticket was actually a free ticket I had previously won for an early January Draw, to which I added the encore. Our life was pretty busy then, so the winning ticket lived in a Safety Deposit Box, and to be honest, I rarely thought about the money sitting there.” With the ticket safely tucked away, it was some time before the Beaudoin’s were able claim their prize, but in the end, after a quick trip to Toronto to “…Pick up the real cheque, followed by a fun visit with our daughter, Natalie and her family, who live down that way,” Beaudoin notes “It’s all very real now! We’re very grateful for this unexpected enhancement to our retirement fund and excited to share with our family, with a few treats for ourselves along the way. A huge thank you to all our friends in Sioux Lookout and beyond, for all the good wishes on our good fortune.”
“A big thank you too to Joe Carbone and his staff for helping us through the process of claiming our win,” Beaudoin finished, adding, “And thank you to The Sioux Lookout Bulletin for this opportunity to share my story locally!” 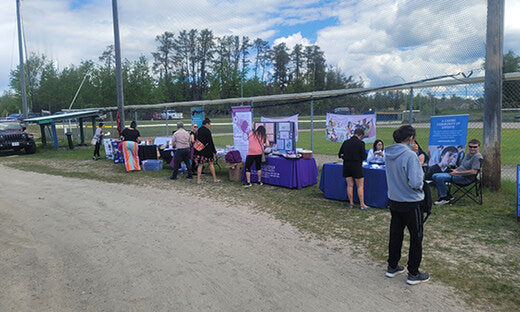 The Sioux Lookout Violence Action and Awareness Committee (VAAC) hosted their final event before summer with an outdoor barbecue on June 6 at the Sioux Lookout Baseball Diamonds...