The Sioux Lookout Dart League hosted their annual Sioux Lookout Dart Tournament on March 13 and 14, which saw 28 participants compete at the Legion in Sioux Lookout.
Participants, both local and from out of town, competed in Blind Draw Doubles, Open Doubles, Ladies Doubles, Men’s Singles, and Ladies Singles action during the tournament.
The team of Boris Procyk and Shane Sakchekapo won the Blind Draw Doubles, the team of Dale Oakley and Derrick Greene won the Open Doubles, the team of Christy McIntomney and Cindy Richards won the Ladies Doubles, Tyler Nelson won the Men’s Singles, and Kristen Wright won the Ladies Singles.
In a post on Facebook, tournament co-organizer Shane Sakchekapo shared, “I would like to say thank you to the Sioux Lookout Legion for allowing the Sioux Lookout Dart League to put on their annual Sioux Lookout Dart Tournament… I would also like to give a huge thank you to all the participants who travelled near and far to make this tournament possible.”
Despite a bit of a lower turn out at this year’s tournament, tournament co-organizer Derrick Greene said he’s happy to see plenty of loyal participants coming from out of town.
“We had a bit of a lower turnout this year, probably because of what’s happening. Last year we had close to 40 people, but a lot of these people are from out of town. Out of 28 participants, there’s probably 10 or 12 of us that are local and the rest are from out of town, so it’s pretty good,” said Greene.
This year dart players locally have enjoyed an organized league that takes place every Wednesday night at the Legion at 7 p.m. In the past, darts was a drop-in opportunity, but the first-year organized league has seen over 20 players participating regularly.
“It’s the first year we’ve had an organized league in the past 20 years… It gets people out. It’s mainly to come out and have fun,” said Sakchekapo, league co-organizer.
“We have six teams, 24 people, that compete in the darts league regularly. Before it was just a drop-in style, so this year is our first year as a legit league… We have 24 people that come out every Wednesday, and we hope to grow that next year to ten teams with 40 people,” said Greene, league co-organizer.
For more information, contact the Legion
at 737-3232. 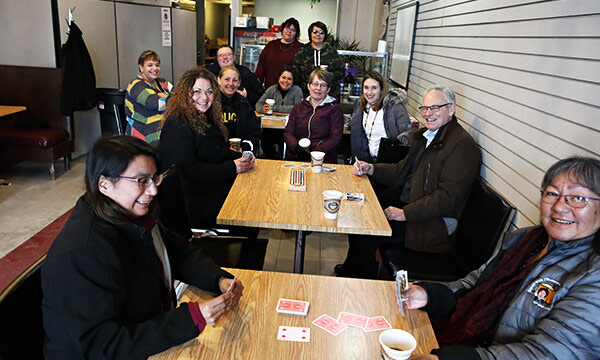 Community agencies have come together to provide a warm, safe space for those experiencing homelessness on the streets of Sioux Lookout.