The Sioux Lookout Fire Service celebrated the promotion of four recruits to the position of firefighter earlier this summer following a 12-month probationary period.
Bob Popovic, Fire Chief / Emergency Services Manager for the Municipality of Sioux Lookout explained  that the promotion ceremony, which included the presentation of official certificates, was done to acknowledge the time and effort each firefighter had put into the fire service.
“As part of the probation period, it’s not just the training, but it’s also the time they put into being mentored by other firefighters and officers. They’ve put in close to 100 hours of training so far,” he said.
Newly promoted firefighter Kelli George-Egerter shared, “My dad was a firefighter for something like 24 years and it always interested me… talked to my husband, he was fully supportive.”
She said of her training, “It’s been really good. The guys have been super supportive as far as training and everything else goes. The captains have been great.”
Newly promoted firefighters Kris Bradley and his wife Nicole Robertson joined the fire service at the same time.
Bradley said he had been thinking about joining the fire service for quite a few years. He said training was a great experience, adding it has been great to get to know everyone on the department.
Robertson said of joining the fire service, “I was interested because I’m a registered nurse and I felt that there were more ways to give back to the community.”
Neither she nor her husband knew the other was interested in joining the fire service.
“So, when we told each other, it was kind of a surprise, so it worked out well,” she said.
Newly promoted firefighter Shelby Ogden said of joining the fire service, “I’ve always wanted to give back to my community as I was born and raised here… I was really eager to apply and… and it’s been a great experience so far.”
Deputy Fire Chief Dennis Leney, who has been a member of the fire service for more than 40 years, said of mentoring the new recruits, “Its been interesting. In 42 years, things have changes so much and having these four new recruits, new firefighters, has been good because they’re very interested, all of our firefighters have been interested… We’ve had some excellent, excellent firefighters train over the years and quite a few have come up and made excellent captains and I’m just so proud of this fire department.”
Leney credited the fire service’s training officer Jeremy Funk for doing such a great job with the new firefighters.
Popovic said anyone interested in joining the fire service is welcome to drop by the Fire Hall and speak with him. 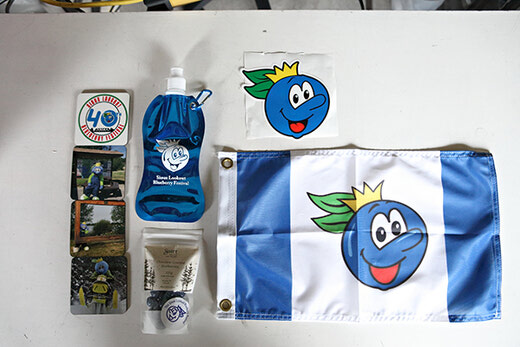 Sioux Lookout's 40th annual Blueberry Festival gets underway on July 29 and more than 80 events have already been registered...