The Sioux Lookout Bombers are rapidly adding to their roster leading up to their Superior International Junior Hockey League (SIJHL) debut in September.
On June 9 the Bombers announced that they had traded for right winger, Lucas Trimarchi. In return, the Toronto Patriots will receive a player development fee.
The Bombers shared on their Facebook page that Trimarchi, a native of St. Catherines, Ontario posted 8 goals and 13 assists in 50 games with the Patriots last season in the Ontario Junior Hockey League.
On June 14, the Bombers announced the signing of defenceman Peter Zilkalns of Dryden. The Bombers shared that in 2021-22, Zilkalns played for the Kenora Thistles of the Manitoba AAA U18 Hockey League. He had one goal and six assists in 30 games played.
Just days later, on June 18, the Bombers announced the signing of defenseman, Aidan Milburn. The Bombers shared that last season Milburn suited up for the Wapole Express of the Eastern Hockey League where he notched 3 goals and 3 assists in 37 games.
On June 19 the Bombers announced the signing of twins Blake and Connor Burke from Thorold, Ontario. Both are forwards who played for the Wilkes-Barre/Scranton Knights of the USPHL Elite. Blake scored 17 goals and had 17 assists in 22 games while Connor scored 14 goals and had 16 assists in 21 games, the Bombers informed.
Austen Hoey, Bombers Director of Hockey Operations, shared of trading for Trimarchi, “We’re super excited to have a player like Lucas join the Bombers, playing in a solid league like the OJHL and putting up points while also being solid defensively is exactly what we’re after when it comes to veteran players and we’re excited for Lucas to be a leader for us on the ice and off.”
Hoey said of signing Milburn, “Anytime you can add a guy with that size, you have to, it’s something you can’t teach, and we’ve been very impressed not only with his defensive ability, but his skating, for a big player, is quite impressive, coupled with the fact that he’s familiar with a few of our other players, and we are very excited to a have great kid like Aiden join our club.”
Hoey commented of signing Zilkalns, “Adding a young, big, and great skating defensemen is something literally every team would be excited to add. Having a player like Peter come in to be a solid player in our Top 6 is something were super excited about, and the fact that he’s a local kid is of course a plus. Being a huge member of our community while also contributing on the ice is something we believe Peter will strive at.”
Bombers Head Coach Carson Johnstone said of signing the twins, “I have coached these two over the past two seasons, and it is not often you come across the pure skill and ability that these two have. It is special to have in one player, but to have both of them, adding their IQ and talent to our roster is something that is very exciting for us. I can’t wait to see them bring their game to the next level and push themselves to reach their full potential while helping us win hockey games.” 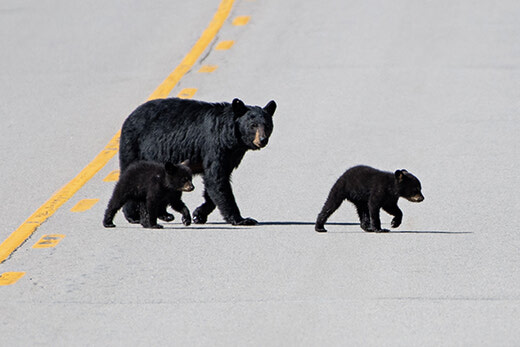 This mama Black Bear was seen leading her two cubs across highway 72 on the morning of June 7...