The Sioux Hudson Entertainment Series (SHES) returned on Thursday, March 17 after rising COVID numbers in February forced Royal Manitoba Theatre Centre to cancel their presentation of Chase the Ace.
Welcoming patrons back to the Sioux North High School cafetorium was Twin Flames, a two-time Canadian Folk Music Award winning husband and wife duo.
Twin Flames is made up of Chelsey June, a Métis (Algonquin Cree heritage) from Ottawa, and Jaaji, an Inuk and Mohawk from Nunavik and Kahnawake. The duo have been the recipient of three Native American Music Awards and many international awards, including penning UNESCO’s official song to celebrate the 2019 International Year of Indigenous Languages.
SHES Chairperson Alyson Martin described last Thursday evening’s show as another in a long line of memorable performances over the past season, stating, “The audience was treated to these accomplished musicians through their songs and stories. They created a space where difficult subjects could be shared through their songs, not only in raising awareness but in hopes of starting a respective dialogue. The feedback afterwards was positive, heartfelt, and uplifting. Their blend of harmonies, voices and instrumentals will surely take us through to the summer. Hearing the audience finish off the evening with a collective ‘You Are My Sunshine’ was worth it’s weight in gold. People, as they were leaving, were sharing unsolicited what the evening meant for them.”
With the continuously shifting public health restrictions and requirements, Martin explained, it was at times a bit of a challenge to find a date that fit both the SHES and the acts they wanted to bring in, explaining, “While some of it has been challenging, the committee itself is committed to doing what we need to do in order to support artists so they can work again, and for us to do what we love doing, which is to bring artists and audiences together. Ensuring the performing arts are alive and well in our community. We couldn’t have done it without the support and understanding of those who walked through the doors, both the artists and or audience members!” Martin continued, “With respect to Twin Flames, in order to make sure we could still present them as part of the season, March Break was our only option. We appreciated their availability, and our block booking partners coming together, and the school board allowing us to use the space at this time and under unusual circumstances. It was an intimate and thoroughly enjoyable evening. The artists were thrilled to be in front of live humans, and they said to make sure that was clear… they were so happy to see faces again. There we were, all sitting together.”
As for the rest of the season, Martin shared, “We have two shows coming up. The first is Whitehorse, that’s Tuesday, May 10. They are a Canadian folk band, composed of a husband-and-wife duo. We’ve been trying to get then to come to Sioux Lookout and tour northwestern Ontario for a number of years now and we are really thrilled to have them here for that show. That will be followed by Buck 20, which is happening Wednesday, May 25. They are a country music duo from the small towns of Harrow and LaSalle, Ontario, and we are very pleased to have them coming to our stage. Both shows are taking place at Sioux North High School, with the door opening at 7 (p.m.) and the show beginning at 7:30 (p.m.). For people to get updated information there is our website, Facebook page, and posters around town, and of course ads in the Sioux Lookout Bulletin.  Even if the website isn’t updated right away, it will be. Unless something changes, tickets will be available not only through Eventbrite but will also be available at the door, which is a really great change from the regulations that we had to follow before.”
Martin asked to address the questions the SHES committee has been getting about the Royal Manitoba Theatre Centre’s cancelled event, stating, “We have been getting questions about our Manitoba Theatre Centre booking. They did not miss that performance. They were not able to re-book their touring dates, but they are definitely on or roster as part of our 2022/23 lineup preparations. We want to make sure that our theatre lovers know that.”
Martin also wanted to remind patrons to continue to use the front doors at Sioux North High School to access the events, explaining, “We do want to ask that anybody coming to one of our shows enter through the front door of the school so our committee members can ensure that we get people through the ticket process as smoothly as possible. We always like to keep the back area, where the artists are, secure. It allows them a bit of privacy as they do what they need to do before the show.”
Martin also expressed the hope that sponsors who were not asked to support the SHES through the pandemic will be able to step up again once they launch their fundraising drive before the upcoming season, noting that previous sponsor’s names have been kept in place on this current season’s programs to reflect their prior support.”
In closing, Martin noted, “Something that we have noticed is that our audience, both season veterans and newcomers, continue to amaze us as we’ve seen some new faces come through our doors that we haven’t seen before. I believe that the community has come to realize that all are welcome at our performances and that anyone can benefit from a date with the performing arts. We continue to work hard as a committee, and when a show wraps, and a season is completed, it makes it all worth while. That’s what we are looking forward to as we inch our way towards the end of the season.” 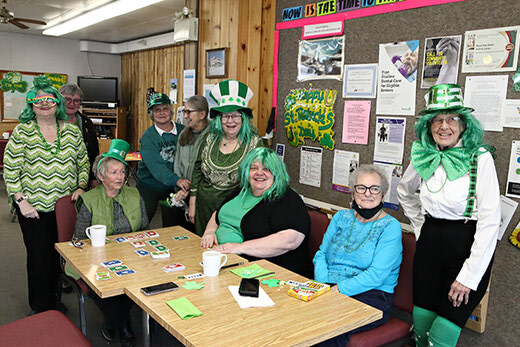 Members of the Sioux Area Seniors Activity Centre celebrated a get together on March 17, St. Patrick's Day, for card and board games by dressing up in the spirit of the day...