Members of the Sioux Area Seniors Activity Centre celebrated a get together on March 17, St. Patrick’s Day, for card and board games by dressing up in the spirit of the day.
Centre executive member Karen Boyko shared, “We have many programs that we’ve run through the seniors centre, especially during COVID. We did a lot of Zoom programs. We did Tai Chi, and we did strength training and now we’re trying to encourage people to come back to the centre and our coffee players have come back. We also have Bridge, 500 and Cribbage that is starting. This afternoon was the first time we were going to try board games and we have an Easter Bingo for the seniors coming up and so we’re just trying to get everybody out. We have 180 members now, so we’re trying to get everybody out doing different things.”
“It’s nice to see new faces and it’s just nice to see people coming back out again,” Boyko added, sharing that the senior centre’s Annual General Meeting will take place on April 28 at
1 p.m. at the Legion.
Boyko said anyone over 50 can become a member, encouraging people to, “come out and see what we’re about.”
“We’re excited. There’s a lot of fun things planned for the year and we’re going to try to get back to some of the things we used to do,” she concluded. 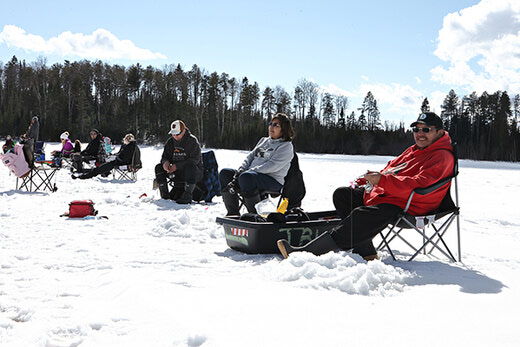 The sun was shining, kids were playing, and anglers were enjoying the companionship of friends and family as they took part in the Annual Debbie Hill Memorial Ice Fishing Derby on March 20 on Bigwood Lake, hosted by the Sioux Lookout Anglers and Hunters..