Chair of the Sioux Hudson Entertainment Series Committee, Alyson Martin shared, “Overall, it was a great opportunity in difficult times, to support artists in the only way we could…virtually….and reinforce the importance of the performing arts. Through their music, and the meaning behind songs they had already written or were inspired to write during the pandemic, there were also stories of insight, humor, and connection.”

Sherman, the facilitator and a performer for the series, said, “Being online, one of the big things about it is, it’s a more intimate setting online, so people come in to the Zoom meeting, and all of the performances have been the same way. We have reached out to a variety of different artists that come from different parts of the musical sector in Canada.”

Martin shared that locals had the opportunity to sign-up for the five open-mic slots that each event consisted of, for a platform to showcase their talents. “We started on March 12 and finished this week on July 15th.  Guest artists included, Stye Quequish - The Sunsetting Kidd; Tara Williamson, Cale Crowe, G.R. Britt and Zachary Lucky,” said Martin. The events were made possible by a micro grant through Ontario Presents and Canadian Heritage.

Given the COVID-19 public health measures, this year the series conducted five online engagement sessions in place of their typical in-person live events. Martin shared that even though a virtual setting was very new for everyone that they appreciated being able to reconnect. “It was a big learning curve around the logistics of, and navigating technology, both for Nick and ourselves.  In addition to that, the experience for the artists performing in front of a screen and the participants responding in kind was surreal but somehow, worked.  The “chat” feed, hand clap “reactions,” or the un-muted, “one person clapping,” were certainly new to all of us, but the warmth and appreciation was there, even in this strange new way of connecting,” added Martin.

Sherman said that they were able to come up with this cool and unique virtual way to enjoy the sessions. He appreciated the audiences for their spirit and involvement. “The audiences have been awesome, they’ve been coming in and enjoying the music and engaging and I think one of the fun things is while we were performing there was a…chat happening on the side, like people are talking on there too and connecting and catching up and old friends are seeing each other virtually and saying hi. So, it’s kind of been an interesting dynamic to see,” said Sherman.

With the huge impact that the pandemic has had on the music industry, Martin said that these events offered motivation to artists to pursue their passion. “Nick and the artists expressed how important events like these are, for them, not only to share their music, but also to encourage them to pick up their instruments, tune those vocal chords…..and play.  Each of them found themselves, at different times, wondering if they would be able to play, write, tour, or perform again?;  asking themselves, if this was a point in their careers where they had to look at taking a different path?  As individuals who love what they do and certainly enjoy the creative process and connections with one another and those who come out and support them, lots to contemplate and work through before being able to put themselves out there, even virtually,” she added.

Sherman said he appreciates the amazing quality of concerts that the series puts on in Sioux lookout every season. He added that the pandemic had paused the live in-person performing element for artists, when the Sioux Hudson Entertainment Series pivoted to virtual and reached out to him to hop on board. Sioux Hudson Entertainment Series stepped up in trying to keep entertainment as part of the community in a new and creative way, said Sherman. “It was a community event for Sioux Lookout, for people that have connections to the community, are also able to attend and catch up and see familiar faces and say hi to,” he added.

“I was thankful that even with all of the twists and turns faced in carrying out these sessions with Nick that it happened. I know that the comments shared by those in attendance made it worth every moment in getting to this point. In our current world of ZOOM and other meeting platforms, the candor and heartfelt conversations facilitated by Nick with the guests and fielding questions from the participants, made you forget that you were sitting in front of your computer, and that, was quite a feat!  Big thanks to Nick and his guests, participants who joined us on ZOOM and other feeds, and of course, Canadian Heritage and Ontario Presents for creating this opportunity,” shared Martin.

The Sioux Hudson Entertainment Series Committee has been working hard, behind the scenes, in preparation for a 2021-2022 series line-up, shared Martin. “Presenting live performances featuring professional artists is our mandate and our passion, and we are truly looking forward to being able to do that again.  Each of the artists and artistic forms of expression we have in store for everyone, are well worth waiting for, pending all of the necessary steps that need to take place in order for us to safely enter the performance space at the Sioux North High School, with presenting protocols in place. We will be working on updating our Website to keep folks “in the know at  www.siouxhudson 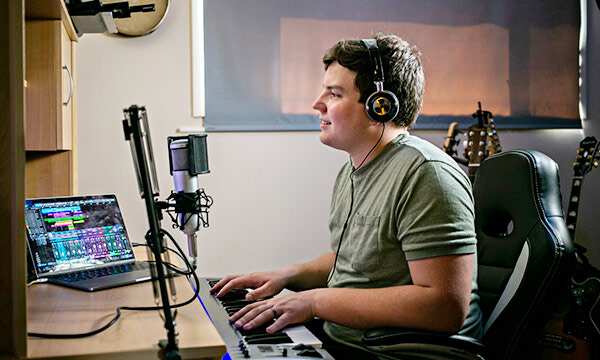 Sioux Lookout singer-songwriter Josh Bellingham has released a new single, Friendships, capturing his thoughts on challenges to connect with friends around changed social norms during the pandemic....