Nahnahda-Wee-ee-Waywin – Sioux Lookout Sexual Assault & Counselling Centre has been selected by the Kenora District Services Board (KDSB) to assume emergency shelter operations in Sioux Lookout effective September 1.
KDSB shared in an Aug 26 media release (https://bit.ly/3RcuGvU) that the change in operator comes from a collective vision by the current Out of the Cold (OOTC) Board Members for a more sustainable shelter in the community. OOTC will cease emergency shelter operations as of August 31.
KDSB issued an Expression of Interest this summer for future operation services and enhancements to the current shelter strategy. Nahnahda-Wee-ee-Waywin – Sioux Lookout Sexual Assault & Counselling Centre was selected and is an Indigenous-based organization operated under the First Step Women’s Shelter.
“Homelessness is not a choice, but rather a journey that many find themselves in. We are committed to ensuring people in Sioux Lookout have access to a safe, warm, comfortable place to spend the night, we will be providing two meals a day and hope to increase to three meals very soon.  We will be working towards creating a space where all people will feel welcome and have access to many services, including working towards finding safe affordable housing. Nahnahda-Wee-ee-Waywin will be operating the Sioux Lookout Emergency Shelter and are committed to working with KDSB, Sioux Lookout Municipality, Sioux Lookout First Nation Health Authority, OPP, and the community members of Sioux Lookout,” Tana Troniak, Executive Director of First Step Women’s Shelter, shared in the news release.
“The Kenora District Services Board is pleased to be moving forward with Nahnahda-Wee-ee-Waywin – Sioux Lookout Sexual Assault & Counselling Centre. Nahnahda-Wee-ee-Waywin’s mission in providing a community safe- place to access support services, is very much in line with the sustainable and collective vision the community has for emergency shelter operations. We look forward to the new partnership. This change is an opportunity to bring together with other community partners,” stated Henry Wall, Chief Administrative Officer of the KDSB.
KDSB advised that there will be no impacts on individuals that access overnight emergency shelter operations during this transition of operation. September Emergency Shelter hours of operation will be 5:00 pm – 9:00 am with breakfast and light supper available to patrons. Nahnahda-Wee-ee-Waywin will be working towards 24-hour service provision with three meals for patrons daily.
“The KDSB and Nahnahda-Wee-ee-Waywin – Sioux Lookout Sexual Assault & Counselling Centre want to thank the Board of Directors and staff of the Out of the Cold Shelter Program for their vital work and dedication to ensuring those who are vulnerable have a safe place to be over the last many years,” the press release concluded. 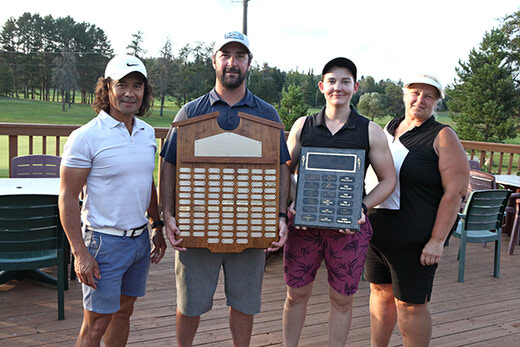 The Sioux Lookout Golf and Curling Club crowned its club champions this past weekend....