The Municipality of Sioux Lookout is joining other municipalities across the region in opposing a proposed redistribution of federal riding boundaries which would reduce the current 10 northern districts to nine.
The proposed new federal electoral map has been proposed by the Federal Electoral Boundaries Commission for Ontario.
The Constitution of Canada requires that federal electoral districts be reviewed after each 10-year census to reflect changes and movements in Canada’s population.
At their Sept. 21 regular meeting, members of Sioux Lookout Municipal Council expressed their concerns regarding possible reduced representation in Ottawa and concerns about how an elected representative could adequately serve the region in a proposed riding [Kiiwetinoong – Mushkegowuk] which would span from the Manitoba border in the west, to the Quebec border in the east.
Council passed the following resolution concerning the potential redistribution of federal ridings:
WHEREAS the Federal Electoral Boundaries Commission for Ontario (“Commission”) released its proposed redistribution of federal riding boundaries in August 2022;
WHEREAS Northern Ontario would lose a seat in the House of Commons under the proposed redistribution;
WHEREAS the proposed distribution would combine most of the population of the existing Kenora and Thunder Bay – Rainy River ridings into Kenora – Thunder Bay – Rainy River and would create the new riding of Kiiwetinoong – Mushkegowuk, a large and sparsely populated far north riding spanning from the Manitoba to Quebec borders;
WHEREAS the current proposal has been criticized as impractical and unfair for northern communities by both current and former MPs from across Northern Ontario, from all three major political parties;
WHEREAS the proposed redistribution fails to recognize the economic, historic, and cultural distinctions across Northwestern Ontario and the separation of interests between the City of Thunder Bay and the other, smaller communities in the region;
WHEREAS the Northern Policy Institute has published research that confirmed that the Kenora and Rainy River districts are in a distinct economic region from Thunder Bay, and these districts generally fall into separate Indigenous treaty territories; and
WHEREAS the Commission has called for written submissions from citizens and stakeholders on its proposed redistribution by September 25, 2022;
THEREFORE IT IS RESOLVED THAT: 1. Council conveys the following comments as submissions to the Commission:
a. Council is gravely concerned by the loss of representation for Northern Ontario in the proposed redistribution and is of the view that 10 seats ought to be reserved for the north to account for its geographic, economic. Social diversity, and as part of a broader commitment to reconciliation;
b. Council is of the view that by combining most of the existing Kenora and Thunder Bay – Rainy River ridings, the Commission will further erode effective representation for the smaller centres and rural and outlying communities, particularly when such vast rural areas are placed in a riding with a large urban population like the City of Thunder Bay;
c. Council is concerned that the proposed map separates communities of similar interest, need, and economy from one another – in particular by placing the communities in the Red Lake area in a separate riding from those in the Kenora, Dryden, and Fort Frances areas and by unnecessarily separating Treaty #3 First Nations from one another across electoral boundaries;
d. Council is concerned that the reduction of Sioux Lookout representation at the federal level will curtail our ability to effectively advocate for the unique needs of our community and for the many Northern communities for who we serve as a critical service Hub;
e. Council agrees with the public comments made by current and former MPs for Northwestern Ontario ridings, who have generally expressed concern about the proposed ridings being unmanageable and impractical;
f. Council is concerned that the proposed riding map for the Northwest fails to account for the vast geography of the region and the economic, historic, political, and demographic differences across the region;
g. Council is of the view that the current proposal creates boundaries for the purpose of adhering to the population formula without fully accounting for the unique geographic, industrial, and cultural realities of northern communities and their different community interests;
h. Council is of the opinion that effective representation for the Northwest requires that travel times, Indigenous territorial boundaries, community history, provincial boundaries, and economic regions be reflected in federal electoral boundaries;
i. If the current 10 seats for Northern Ontario is not maintained, Council suggest that consideration be given by the Commission as to whether the City of Thunder Bay ought to be contained within a single riding in order to give more effective representation to rural and smaller communities in the region; and
j. Council is of the view that the Commission should recommend that “exceptional circumstances” apply to more than one riding in the Northwest to justify deviating from the per-riding population target if it is necessary to achieve an appropriate electoral map that reflects the needs and concerns described in the previous paragraphs;

2. Council directs the Municipal administration to send a copy of this resolution to the commission with a covering letter, by email ([email protected]) before September 25, 2022
3. Council directs the administration to publish a copy of this resolution on the municipality’s social media; and
4. Council directs that a copy of this resolution be sent to the Northwestern Ontario Municipal Association;
All municipalities in the Kenora and Rainy River Districts; and The current MPs for Northwestern Ontario ([email protected], [email protected] and [email protected]).
The Ontario commission will be holding an in-person public hearing in Sioux Lookout on Oct. 3 from 6:30 p.m. to 9 p.m. The Municipality of Sioux Lookout has advised that the location of that meeting has been changed to the Royal Canadian Legion at 86 Front Street.
Sunday, September 25, was the final day to register to make a presentation at the hearing. 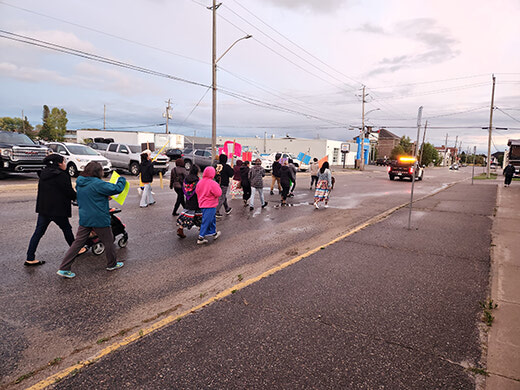 Wednesday, Sept. 21 marked the 26th annual Take Back the Night March since Sioux Lookout began supporting the cause in 1996...