Spring. That sweet time of year that sees our days getting longer, our temperatures creeping higher, and our snow slowly melted away. Unfortunately, with the melting of snow off of area roadways comes another annual spring tradition… dodging the inevitable potholes that our harsh winters create.
Jeff Hawley is Sioux Lookout’s Manager of Public Works and Infrastructure. As he explained, “As the warm weather arrives, we can expect potholes to form as a result of the freeze, thaw cycle. As an asphalt road ages it will begin to form cracks, these cracks allow water to get in and when the water freezes it will make the cracks larger and ultimately cause a pothole to form. In some instances when the pothole is repaired the repair material can become dislodged and the pothole will return in the exact same location. Fine cracks leading away from the pothole can often form new potholes. As such, it is not unusual for another pothole to form in close proximity to the first one.”
While keeping potholes under control may sound like an exercise in futility, as Hawley explains there are steps that Public Works takes to minimize their reoccurrence, stating, “Historically, we have used an asphalt product generically referred to as cold mix to repair potholes.  Lately, we have not been achieving the long term results we would like to see from this product so we will be trying a new product (which) has had good results in other communities in Northwestern Ontario. We are optimistic that once our shipment arrives, residents should notice an improvement in the longevity of pothole repairs. That said, potholes will continue to occur, as they do every year, and staff will continue to be diligent in attending to them.”
Another aspect of the spring driving season motorists should be aware of is the change in load restrictions on some area roadways. “Normally restricted loads (commonly referred to as “½ loads”) start on or about March 15th,” Hawley adds. “However, they are set by MTO (not us), and the dates are dependent on frost conditions.  Right now, MTO is telling us the restrictions will be put in place on or about the 1st of April.  We will provide notice to the public via The Sioux Lookout Bulletin, and our website and social media channels.”
For those travelling on foot, spring sidewalks can present their own hazards to consider as Hawley describes. “Sidewalk clearing will continue on an as needed basis, based on snow fall… which we are all hoping will end soon!  With the warm weather approaching, crews will be focused on trying to get the sidewalks down to bare pavement as soon as possible. It is important that residents remember, that during the day, melt water will be flowing across many sidewalks, the sidewalk may be wet but provide decent traction.  However, that same sidewalk in the early morning or late evening will be very slippery as the melt water freezes.  Staff will be sanding sidewalks, however once the melt water covers the sand and the water freezes again, the area will become slippery again.  An additional hazard is that the melt water is so clear it can often be difficult to determine if the sidewalk is simply wet to bare pavement or if it is water on ice, or glare ice.  As such, regardless of our sanding efforts, residents should always exercise due care and caution during the spring melt.”
The removal of area snowbanks has also started to wind down, with Hawley noting, “We have been using a contractor (in conjunction with Municipal forces) to assist with the snowbank removal.  This was recently approved by Council due to the heavy snow volumes we have experienced.  The contractor is now done that work.  Any further snowbank removal will be by Municipal staff only, and on an as needed basis.”
Alleyways are also a priority, as Hawley notes, “Staff are working on back lanes as well as main streets.  We appreciate that with the warm temperatures the compacted snow that has developed over the winter is now causing deep ruts in some locations.  Crews are attempting to clear to bare pavement wherever we can.”
Hawley asks that the public try to remain patient while the town continues to deal with getting roads and sidewalks cleared, adding, “We have no issue with the public calling to identify issues or concerns.  However, some residents are yelling and, in some cases, even swearing at staff.  Doing so does nothing to help the situation.  We live here, too.  We drive the same roads and we understand your frustration. Staff are doing the best they can, so when you do call, please try to treat the person you are calling, the same way you would expect to be treated, if we were calling you.” 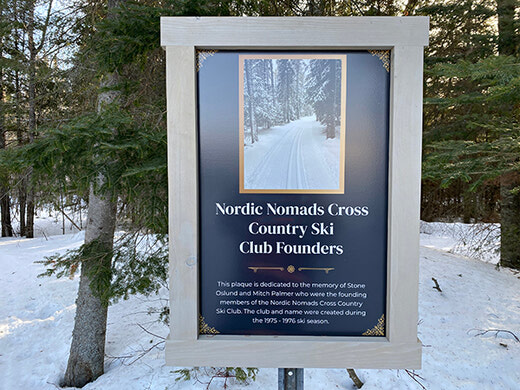 By all accounts, the Nordic Nomads Cross-Country Ski Club have had quite a winter, and with a bit of luck and a bit more snow, it might not be over quite yet...