Paul Bayda of Thunder Bay, Ontario, at the age of 86 years old, passed away peacefully at the Thunder Bay St. Joseph’s Hospital on July 21, 2019 after a long battle with COPD and heart disease. Paul was born on June 22, 1933. He married Evelyn Shirley Armstrong, the Tec Voc Freshie Queen, on June 1, 1957. They made their homestead in various locations across Canada. Paul had a very long and rewarding career with Canadian National Railway and then toward the end of his career transferring to Via Rail Canada (spanning 48 years from 1952 – 1990) from which he retired on January, 1990. He was a member of the Shriner’s Club and enjoyed dressing up as “Wingo” the Clown and making balloon animals for the children at any event he attended. He also enjoyed the family reunions which started in 2013, visiting family and friends, playing in bocce ball tournaments, and helping with peeling potatoes for his daughter Shirlee’s weekly perogy making sessions. He enjoyed cooking and volunteered with the Gran Sasso Club, Thunder Bay for a few years making fries and pogo’s in their mobile food trailer at various events. His one main love and passion was playing the accordion and entertaining. Paul was a self-taught musician, he played various instruments and played in many bands throughout his life. You could see a sense of calm come over Paul when he picked up his accordion and began to play. When he played music you could see he was home. Paul will be lovingly remembered by his children: Diane Samuel (Monty), Shirlee Bayda-Clace (Clayton), Gayle Hoey (Denny), Sharon Gulyas (Jeff), Kelly Bayda-Presutto (Joe); grandchildren: Stephanie, Alexander, Tristan, Courtney, Brittany, Tiffany, Austen, Kristen, Meagan (Jesse), Mandy, Thomas, Nicholas; great grandchildren: Aiden, Bentley, Christian. He was predeceased by his wife, Evelyn Shirley Bayda (nee Armstrong) and his parents Alec and Elizabeth Bayda.
We would like to thank all of the nurses and doctors for their compassion and the excellent care provided to dad while he was at St. Joseph’s Hospital. Cremation has taken place and a Celebration of Life will be held at Assiniboia Downs on September 1, 2019 which will be advertised once again closer to that date.
Online condolences may be made through www.nwfainc.com 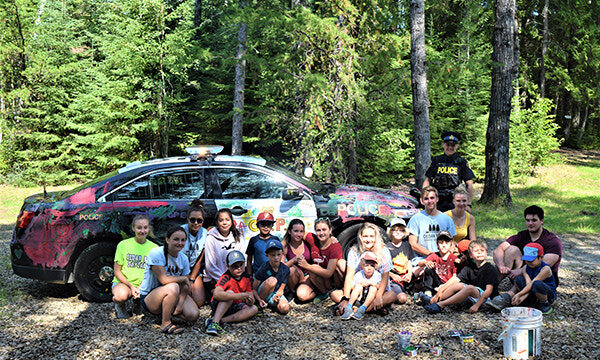 Cedar Bay Day Camp welcomed OPP Constable Andrea DeGagne on July 25 as a special community guest. Campers had the opportunity to paint DeGagne s OPP cruiser, get handcuffed, and operate some of the cruiser s horns and sirens...