Lac Seul Police Service (LSPS) Chief Bruno Rossi, accompanied by LSPS Sergeant Philippe Laporte, presented Sioux Lookout OPP Staff Sergeant Jason Spooner as well as Sioux Lookout OPP Detachment Commander Karl Duewel on behalf of the Sioux Lookout OPP, with special plaques thanking them for the assistance they have provided Lac Seul Police Service.
Police Chief Rossi made the presentations on July 18 at the Sioux Lookout OPP Detachment.
Spooner was Acting Chief of LSPS for three and half years, handing over command of LSPS to Rossi this spring.
“Being new with Lac Seul, I’d heard a lot of things within the police service about Acting Chief Jason Spooner prior to my arrival. Amazing job that he did. The service was in a bit of a disarray when he came in to take over and he did a great job, actually setting it up for me to walk in the doors and basically just take over. There wasn’t much I had to do or change. Jason came in and did a fantastic job and this is the reason why we’re honouring him today with the plaque we provided him.”
Rossi also presented Staff Sergeant Spooner with a police challenge coin. “I had a challenge coin created and it has our police service logo on one side and the loon on the other side (which is in Lac Seul First Nation’s logo).”
“With respect to the OPP,” Rossi said. “They received a plaque today and that’s because of the great working relationship that the Lac Seul Police Service has had, and not just Lac Seul Police Service but the community as well, that’s had with the OPP and I mean if it wasn’t for them, the police service would have been in a lot more trouble, so they allowed Jason to come over and be Acting Chief and it worked out really well.”
Spooner said he was happy to help out.
He said of the recognition from Rossi, “It really means a lot to me and the detachment here. We have a very close working relationship with the Lac Seul Police Service. Honestly, I built a very strong connection having worked there for three and a half years and I’ve really enjoyed working with Chief Rossi so far. He brings a lot of experience and a lot of police management and leadership to the police service. The items I was presented with today are very nice and I’m very appreciative of him coming here today to do this.”
Sioux Lookout OPP Detachment Commander Karl Duewel said of LSPS recognizing Staff Sergeant Spooner, “We’re really proud of Staff Sergeant Jason Spooner and the work that he was able to do out in Lac Seul with the police service in the community there.”
He went on to state, “I think it was very kind of the community and the police service to recognize the OPP for sending Staff Sergeant Spooner to work in Lac Seul. It was our pleasure as an organization to do that for them.” 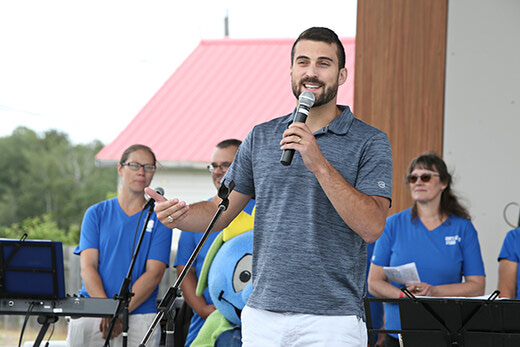