Cedar Bay Stables has announced the first recipient of their Youth Bursary, which allowed one young rider to attend a Cain Quam Horsemanship Clinic in Dryden which took place June 3-5.
Sydney Southwell was chosen to receive the bursary after seeing an advertisement for the clinic.  Southwell is a relatively new rider and has been an active volunteer at Cedar Bay Stables where she has been gaining horsemanship skills for the past year and a half.
Southwell explains, “I saw the riding clinic posted… and I thought it would be a good idea to go and learn some more things with Cookie.”
Cookie is the horse that Southwell leases from Cedar Bay and works with in her training.
Southwell continued, “I brought it up with Destiny (Pryzner, Southwell’s horsemanship trainer) and she thought it was a great idea, we just had to make sure we could get there with Cookie. Originally, I thought I would have to pay the entrance fee, but Destiny made up a proposal asking Cedar Bay (to assist), and they said yes!”
As Pryzner explains, “The program is brand new. Sydney had been taking lessons with me over the course of the last year, and her horsemanship has developed tenfold. She’s been a dedicated member of our co-op; she never bats an eye or complains about doing chores and is more than willing to help out. She approached me in January or February of this year when she caught wind of this clinic taking place and asked if I would be able to support her in going. I approached the Friends of Cedar Bay Board on her behalf and advocated on her behalf for some funds to be allocated for this clinic, so that is how the bursary came to be.”
One of the requirements the board set for Sydney was that she write an essay on why she felt she was deserving of their support. Sydney then presented her essay, part of which reads, “My interest in horses began when I was three years old… I can remember being afraid of the horses and didn’t want to get too close. If it snorted or made any kind of noise, I would be scared of it. Since then, I have become more passionate about horses and love to be with them. Cedar Bay is important to me because if there weren’t any horses, I would not have had any chance to experience horsemanship. It has been healthy for me to get out everyday to make my body move and clear my mind. It has helped me learn to focus.”
Pryzner feels the clinic was a real benefit for both rider and horse, noting, “It went phenomenal… it was quite a pleasure to watch the two of them come together as a team over the course of the weekend.” Pryzner continued, “The development of life skills that can be taught at the barn is huge. Responsibility, problem solving skills… I just really want to highlight Sydney’s dedication to Cedar Bay and to her own horsemanship journey, she’s a very dedicated young woman and I’m very proud to have the honour of instructing her.” 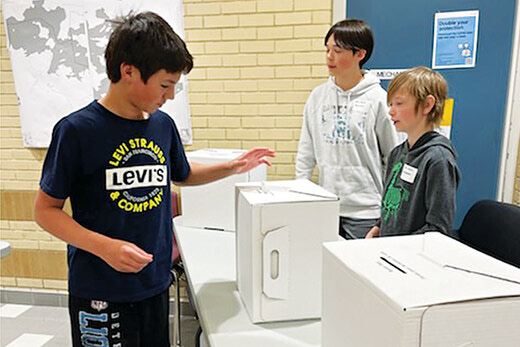 Area students were able to take democracy into their own hands when participated in Student Vote Ontario 2022...