With a passion for photography, Sioux Lookout resident Justin T Stevens has published his first calendar, which includes photographs of northern Ontario. Stevens said, “Northern Ontario has some of the most beautiful landscapes, and I think people don’t always appreciate how much beauty we have right in our own backyards. Being in Sioux Lookout has inspired me even more with my photography. Having the ability to see some of the most stunning sunsets, northern lights and wildlife is an experience you typically don’t find in a city.”
Stevens mentioned that the calendar served as a medium for him to share the beauty of this area through his photographs with people far and wide. He shared, “The calendar was ultimately inspired by my children, but also in a way was for me to get my work out there. I wanted to showcase this area for the people who live here and also my friends and family who live in other cities. This has been a goal of mine for a long time and it’s been very rewarding seeing it come to life.” Stevens has published four Sioux Lookout photographs in his calendar.
Inspired by the northern lights, Stevens said that he got acquainted with photography over 10 years ago, when he began taking photos on his phone. He found photography as a gateway to deal with issues of anxiety and depression. “I was having some issues with anxiety and depression and found photography. I used it as a tool to help me deal with some of the issues I was facing. Some of the most peaceful and relaxing experiences for me have been in the middle of the night, in the pitch dark, listening to nature while watching the northern lights dance.”
Stevens began sales for his calendar in late November, with hopes to continue into the New Year. He said that he will have the calendar available for as long as there is any demand. Stevens initially made use of the Sioux Lookout & Area Events & Services page and his own account on Facebook, to commence sales. The calendar can now also be bought at DJ’s Gas Bar. He said that the sales went better than expected.
Stevens is thankful to his family, peers and the community for their support. “I was surprised at all of the positive feedback I received from this calendar. I figured my family and friends would be supportive but I never imagined how supportive the community would be for this calendar. I feel very grateful for all the support and I’m very happy that people will also get to enjoy the beautiful photographs of the place I call home.” 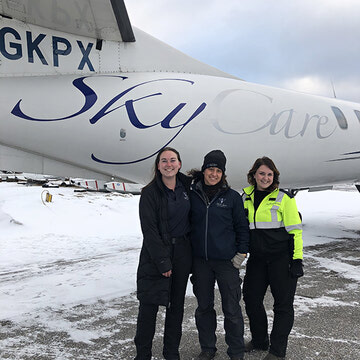