SkyCare recently recognized and celebrated its first all female medevac crew.
SkyCare shared, “It has only been in the last month (November 20) that we’ve had women in each of the positions required for a complete medevac crew.”
SkyCare stated that they are very proud of this crew and their accomplishments. “We always encourage women to become involved in aviation; anyone can do anything they put their mind and hard work into. We have always hired by competency in abilities in trade, not by gender, race, ethnicity, etc. It is always our goal to have a well-diversified company. These women have proven their competency and have great careers ahead of them!”
SkyCare mentioned that the crew’s Captain, Jenn Chwastyk, has been in the aviation industry for many years and has experience and professionalism that they value very much. She began flying with SkyCare in 2018. “The First Officer, Caitlin MacGillivray, is an up-and-coming pilot who is on track to excel in the industry. The third crew member, Ciara Brown, was the paramedic, who works hard saving lives and is an essential member of the medevac team.”
Chwastyk left the airline industry for 15 years to raise her two daughters, until recently when she found her way back into the industry and began working with SkyCare Air Ambulance. Chwastyk, with a family background in aviation, shared that working within this environment was a different experience for her. “I have periodically been the sole woman pilot in my 33 years of working in the aviation industry. Consequently, I look forward to many more days working with these strong, intelligent, and dedicated women; the atmosphere is of mutual respect and confidence.”
MacGillivray, who also comes from a family immersed in aviation, got her private pilots license before finishing her last year of University. She shared, “I feel extremely proud to be part of the first all-female medevac crew. SkyCare has such an incredible group of medics and pilots to begin with but it’s particularly amazing to have such a good representation of women working in all operations of this company. I am very excited for this to be a regular occurrence that I get to experience in day-to-day operations.”
With their first female pilot having been hired in 2016, SkyCare has had quite a few female crewmembers over the years; the majority of them have been paramedics. SkyCare shared, “It is staggering to realize that in all of Canadian aviation, only about 15 per cent of pilots are women. In 2020, in a survey for pilots in the fixed-wing Canadian sector, the numbers were approximately 2800 men to 150 women - that is a big difference! The aviation industry has historically been predominantly male but we love to encourage women to get into the field, and we’re very proud that we now have a number of women flying our aircraft, and will continue to promote those opportunities.”
MacGillivray shared that she thinks diversity in any workplace is important and that it is unfortunate that the aviation industry has such a low representation of female pilots. “I think having more females in the field makes it easier for other women interested in the profession to feel inspired and see that it is more than achievable for them to get into the industry as well.”
Chwastyk added, “Having more female pilots in the industry enhances the diversity of the workplace; typically, there exists a variety of personality and aviator attributes among male and female pilots: aptitude, spatial, and cognitive abilities differ and can impact daily flight operations. I have recently read studies that show male pilots tend to possess greater visual-spatial abilities, while female pilots are more fluent and pay extra attention to details and precision. I’m not sure how accurate this is; but I have noticed that I personally bring something different to a 2-crew and 3-crew (medevac) environment, than my male Captains or Co-Pilots would. Two different, but equally effective ways to obtain the same result and get the job done safely.”
MacGillivray mentioned, “I have experienced a few patronizing comments here and there or surprise from some that I am indeed the one flying the airplane. However, I have never experienced anything but support and positivity from fellow colleagues, friends, and employers.” Brown mentioned, “With the ever-changing industry, one that has been seen in the past as a ‘Man’s world’, it is so important that society see that your gender does not determine your capabilities.” Brown added that working as a paramedic, you often hear comments doubting your physical capabilities as a woman. “At times it can get discouraging, but remembering that you are just as capable as a man is to be in that role, is so important.”
Chwastyk shared, “I had a dream, and I am now living it, and embracing it. Have a goal, and be flexible with the diverging paths to that goal. It’s the paths along the way that provide you the experience, knowledge, and wisdom you pass on when you finally reach your goal. Find a mentor, be a mentor. Never allow social or workplace inequalities discourage you; embrace them, learn from them, and keep moving forward.”
Starting to fly medevac flights in 2006, SkyCare shared that it began to expand and offer charter flights in Northern Ontario and Manitoba, and now down to Southern Ontario and even internationally. “Our home is Sioux Lookout, but we have bases in St. Andrews, Kitchener and Thunder Bay. Our mission is to continue to serve our communities under our three guiding principles: Safety, Service and Stewardship.” 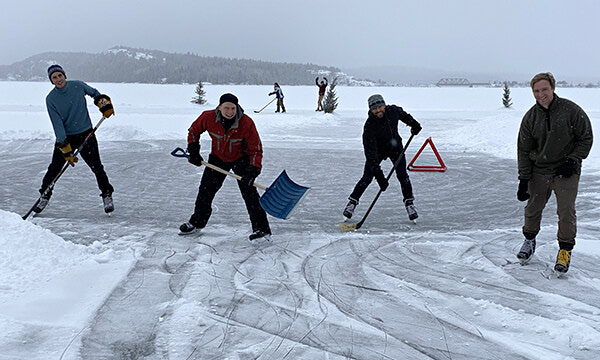 Sioux Lookout Skating Trail ready for another year of fun

Sioux Lookout s skating trail is up and running for its third year.
Dr. Ruben Hummelen, who began what has now become a tradition in Sioux Lookout, said this year s trail will be even bigger and better than ever before.
Please come, put on your skates.