A chance late season dive has resulted in a lost wallet being returned to its owner.

When Dave Terry decided to try out a new dry suit before winter set in, he knew just who to call to join him. As Chuck Abela explains, “Dave had bought a new dry suit and was itching to try it out. Normally we wouldn’t be diving this time of year, but he wanted to go diving so I said ‘Okay, where are we going to dive?’ and he said, ‘How about Love’s Cove?’  We go down there diving and the first thing Dave does is pulls out this wallet.”

Abela continued, “We didn’t think much of it. We threw it in the bag with the rest of the stuff and carried on with our dive. The dive was just for fun, just a kind of treasure hunting… with the boat launch there, you’re usually going to find stuff. We found a cell phone, about four pairs of sunglasses.  After being in the water for about an hour and a half we got tired of dragging stuff up, and my wife (Pat) says, “You know, there’s money in this wallet. There's about a hundred dollars in there!”

Abela and Terry talked about it and knew what they needed to do. Abela continued, “Dave and I talked about it, and we said we didn’t really feel right keeping the money. The guy had long since lost the wallet, so he figured he’d never see it again, but that wasn’t the point. It was the principal of the thing.” Abela reached out to the owner using the ID found in the wallet and was able to return it to him the next day.

The owner of the wallet, Rafiqul Islam, never expected to see the wallet again. As he explained, the wallet had disappeared from his truck one night in 2020. After reporting it stolen to the OPP, he went about replacing both the wallet and its contents. When he got a call last week saying his wallet had been found, he was more than a little confused. As Islam explained, “I was shocked because my wallet was with me! It was a year since I lost the old wallet. Then the person who called (Abela) also messaged me and met me at (my workplace) and returned (it) to me. All my cards were there, even my money was there. So, I really appreciate that, you know?” Islam added. “I really have appreciation, because I never thought I would have found my wallet.”

As Abela says, it was just chance that had them in the right place at the right time. “Dave hadn’t been down more than five minutes when he popped up and said, ‘Look what I found!’.  Because of the conditions, it surfaced. So often stuff is buried in the muck around here, but Sunday was a nice warm sunny day, the water temperature was about 48 degrees.

“We were probably pushing the envelope for the dive season, for us…usually by the end of September, we have shut it down around then.” Abela also confirmed this was the first time they had ever found a wallet, let alone one with money still in it.

So, besides wallets full of money, what else has been discovered while diving around Sioux Lookout? Abela relates, “We did an eco-dive where the original town dock used to be once and we found everything from a picnic set with four chairs to a tiara.”

It’s not just lost items below the surface either. Sometimes, as Abela relates, you run into the things that call our lakes home. “More than once, I’ve been startled by a bass, where I’ve turned around and it bonked me in the mask. They are very territorial, and very curious… they’ll follow you around and check out what you’re doing. Oftentimes we’re helping people with their dock or finding their chains for their dock and almost invariable there’s a bass following you around, and a big one. They’re not aggressive, but they make sure you know they are there.”

If the idea of trying a dive sounds interesting to you, Abela suggests reaching out to him through Facebook and he can direct people from there. 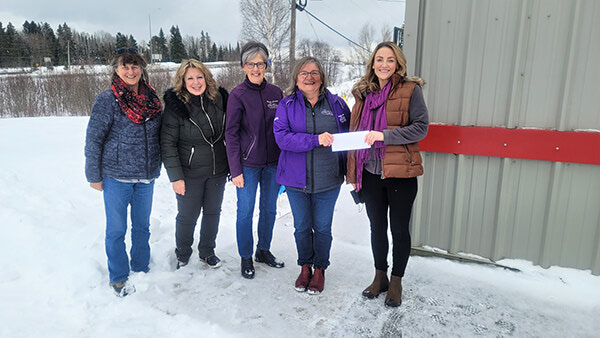 A donation by Valard Construction to this year s Bearskin Airlines Skip to Equip Classic in the amount of $5000 was made by Valard representative Kate Griese on Monday, November 15...