Available in Cree, Oji-Cree, and Ojibway, the KOBE Learn apps are designed to assist users in learning 500 different words and phrases from the three traditional languages, which are languages of northern communities served by KOBE.

“We started the project last October (2017). We had 500 words and phrases to work with, so I brought my native language teachers here for the initial part. The words and phrases had to be translated into Cree, Oji-Cree, and Ojibway so the teachers went home to their communities, and they started working on it with elders,” said Sarah Johnson, native language lead with KOBE.

“I would go to the communities for follow ups to see how far they’re coming along with the phrases. They would then bring the words back to me, which were hand-written, and I would type them up and relay them back for editing. It was a back-and-forth process,” she continued.

From there, KOBE spent one week doing photo shoots for individual photos to accompany each word or phrase. After further app development with Thornton Media, the apps were officially released in the Apple App Store and Google Play Store in November of 2018, where they have since received consistent user reviews of four stars and higher out of five.

“It was released in November in the App Store and it has just spread like fire. It just went and I was very exhilarated, happy, and proud that anybody can use it. That’s what we wanted because we are sharing people and we want it out there for anyone to use. Anyone from a small child to an adult can use it, and it’s accessible,” Johnson shared.

Sioux Lookout Mayor Doug Lawrance was in attendance for the app launch. After seeing the capabilities and hearing feedback, Lawrance shared his excitement for the apps’ potential in not only retaining the languages among Indigenous youth, but also in bridging gaps among the non-Indigenous population as well.

“I think it’s fantastic… For the Indigenous students to retain the language and teach the language, it’s a great tool. For the non-Indigenous residents of Sioux Lookout it’s going to be a great tool to use,” he said.

“To be able to communicate with them even in some simple way of honouring their traditional culture through language with just a greeting, a thank you, or simple phrases is a real bridge. This tool will obviously be huge for that,” he continued.

The apps are being used in the five Keewaytinook Okimakanak schools in Deer Lake, Poplar Hill, Fort Severn, North Spirit Lake, and Keewaywin. The apps are free to download, and Pelican Falls First Nations High School (PFFNHS) is already taking advantage of the new tools.

“My main role is to make sure the kids are learning their language, culture, and instilling the traditional values that they have and, with this app, it’s a nice mix of 21st century technology, but it’s also incorporating the traditional languages… Just seeing the smiles on their faces when they open the app and hear from the other language, that they know they can use and hopefully re-engage with that language and use in everyday life, it’s really nice to see,” explained Mitch Simmons, a well-being worker at PFFNHS.

After hearing feedback from staff members at schools who are using the app, including PFFNHS, Mayor Lawrance shared the significance of teachers having easier access to these teaching tools for students.

“Language, I think, is one of the keys to retaining culture and to identify your uniqueness. It’s the retention of that language. The teaching of the languages to kids in schools and the ability of the teachers to be able to do that, it’s extremely important,” he explained.

After more than a year of development leading up to the release and launch, Johnson shared her relief and joy now that the project is officially launched.

“I’m really relieved now that the project is complete. I’m very proud of my native language teachers, elders, and parents who worked alongside me in completing this project,” she said. 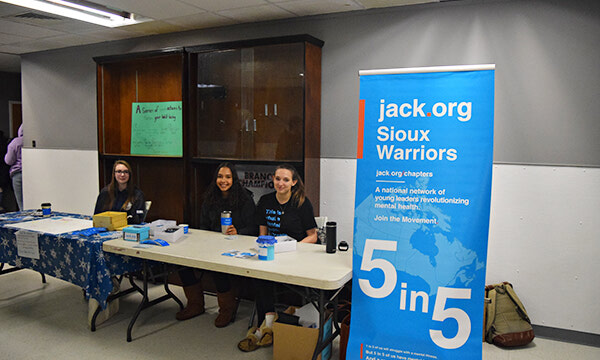 Sioux North High School (SNHS) students came together Jan. 8 and 9 to support and promote the Blue Laces Campaign for mental health awareness during both SNHS boys and girls hockey games.