Sioux North High School (SNHS) students came together Jan. 8 and 9 to support and promote the Blue Laces Campaign for mental health awareness during both SNHS boys and girls hockey games.

Brittany Nielsen, guidance counselor at SNHS, said that two student led groups at the school collaborated for the campaign. Both the school’s Jack Chapter and Free the Children groups joined forces to hand out sunglasses, drink koozies, cards, and tea bags that promote stress relief.

“It’s our second year doing the Blue Laces Campaign. We’ve had the jack.org group together for two years, and the students really enjoyed it the first year they did it. We asked if we could repeat it, and the organization sent us the laces,” she said.

”The Free the Children group is another humanities group in the school, and they wanted to also have a focus on promoting positive mental health,” she continued.

According to jack.org, “Jack Chapters are groups of young people working year-round to identify and dismantle barriers to positive mental health in their communities. Young advocates can start chapters at high schools, post-secondary campuses, or anywhere else that youth gather. With hundreds of Jack Chapters in every province and territory across Canada, each chapter is part of a powerful, active, and inclusive movement... Similar to the pink ribbon campaign for breast cancer awareness, the Blue Laces Campaign creates a visible reminder of the important role that mental health plays in all our lives.”

Every member of both girls and boys Warriors hockey teams wore blue laces for their games throughout the week. Phyllis Elsir, a grade 12 SNHS student and Jack Chapter member, shared that it’s great to be able to collaborate with other groups and teams in the school, especially when they’re able to get the word out publicly too.

“It’s great to have such a big support system like the hockey teams. They’re such a big thing in this town, and it seems like everyone is coming out to these games. It’s great because they’re happy every year to join in because it’s such a small thing like changing the laces on your hockey skates but it has such a bigger picture,” she said.

“We’re excited that we’re getting our name out and now it’s not just school members and school staff that are hearing about us... It’s nice just to tell people who we are, what are movement is, and what we’re planning to do. It’s really rewarding, even, because people are very excited and happy that something like this group is starting up,” she continued.

Nielsen also shared that both the Free the Children and Jack Chapter are completely student run, with little to no influence coming from staff members. She had nothing but good things to say when asked about the initiative the groups are showing.

“The group of kids that we have for both the Free the Children and jack.org group are incredible. They completely have their own ideas and they think of these great things that students want to be involved in and they just run with it. They’re so responsible and they take initiative and this is all them,” she praised.

Elsir agreed that having those freedoms has proved to be beneficial for the students.

Nielsen explained that moving forward, in the near future, the Jack Chapter is planning to do a few more events, with the main goal of going into elementary schools throughout   the community.

“Our jack.org group is primarily mental health awareness, so we made a year-long plan starting in September that takes us to June. We do have a few other events that we’re working on. In February we have a Love Yourself Campaign that the kids are going to work on and, ultimately, by June we’d like to go into the elementary schools. We want to give some basic information to the grades 7 and 8 classes on what mental health is and what it looks like when they’re coming in to high school,” she concluded. 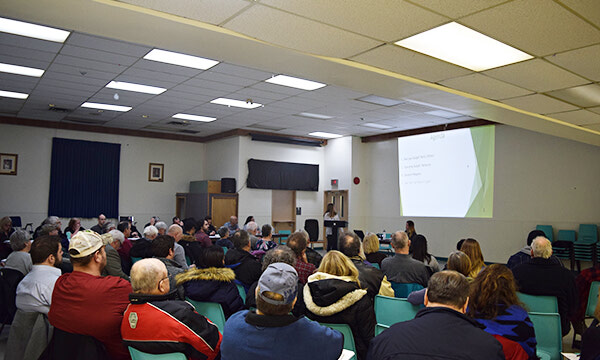 More than 50 community members filled the Upper Legion Hall Jan.9 for a public input meeting in regard to the 2019 draft budget.