Laughter and fun were the order of the evening on Jan. 19 at the Sioux North High School Cafetorium as the Kids Kaleidoscope Entertainment Series presented the Kif Kif Sisters.
Flying bunnies, speeding French fries and giant pink monsters were all part of the “Jam Side Up!” show performed by identical twin sisters Josette Lépine and Françoise Lépine of Quebec City.
“The show was absolutely hilarious. The Kif Kif Sisters had the entire audience laughing many times during their performance. I had several adults approach me after the show to express how much fun they had and how they felt very entertained with the performance,” shared Kids Kaleidoscope Entertainment Series representative Nancy McCord. “The children kept repeating several parts that were their highlight, including the flying potatoes and the magical balloons. It was well received by all ages and the audience would love to see them back in Sioux Lookout in future years. We had just over 50 people in the crowd including our local Girl Guides group. We wish to thank everyone for supporting us.” 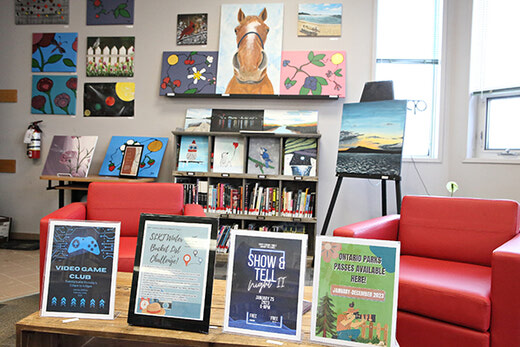 The Sioux Lookout Public Library has become a bustling hub of activity with the concept of a Library Living Room at its core...