Community members packed the Sioux North High School Cafetorium on Nov. 26 for the Northern Lights Community Theatre (NLCT) production, “Reader’s Theatre The  Grinch”,  presented by the Kids Kaleidoscope Entertainment Series.
There were two seatings for the 30-minute, reader’s theatre format, presentation. The afternoon performance sold out with approximately 150 people attending and the evening performance was just a few seats shy of a full house.
Anita Bruins-Burke, NLCT Producer for the show, said she had been thinking about pitching the idea of a reader’s theatre performance to the NLCT Board, and asked a woman at work what type of show she and her family might enjoy and was told anything with the Grinch in it.
Bruins-Burke said the NLCT Board was very supportive of the idea and auditions were held in October, leaving six weeks to rehearse.
Bruins-Burke was joined by Hilary Hardeman, who was the director for the show, and Karen Boyko, who was the stage manager.
Asked about the reader’s theatre format, Bruins-Burke explained, “We have only done full productions before but Christmas is a really busy time of the year, so we didn’t want to have to commit to a bigger rehearsal schedule, so we wanted to just keep it fun and the reader’s theatre format allows you to put things together more quickly and with less effort, so just keeping it fun for everyone involved in the show.”
She approached Kids Kaleidoscope Entertainment Series President Dorothy Broderick about partnering to present the show and thanked Broderick and the Kids Kaleidoscope Entertainment Series for being so supportive.
Following the afternoon performance she commented, “I thought the kids were phenomenal, they just absolutely did a great job.” She added that all of the narrators but one were new to NLCT, which she said was wonderful to see.
It felt amazing she said to see the shows so well attended, “The kids were backstage wondering how many people were out there… we were told more chairs had to be put out to accommodate the crowd – they were really excited about that.”
“I’m just so proud of them. They did so well,” she said of all the performers.
This was the NLCT’s first production since the onset of the COVID-19 pandemic. “It’s so good just to be back with people, be back with the community again,” she concluded.
Connor Suprovich, who played the Grinch, had never acted before. He said he had a lot of fun.
Adrianna Cook, who played Cindy Lou Who, said of her decision to get involved with the production, “I thought it would be cool. I went to acting camp this summer.” She commented following the afternoon performance, “It was really fun. I really look forward to their next show.”
Emilia Blandon-Michelizzi was a member of the choir and shared, “My mom told me about the show, and I was really excited since I love the Grinch movie and I also really like to sing.”
She added, “I was really scared because I have a big fear of singing in front of people, but I guess I just got over it.”
Choir member Julie Cole said, “I liked it. It was really fun, and I had a really good time.”
Fellow choir member Addy Culham said, “I was really happy. I’ve seen people act, so I just really wanted to do this.”
Her sister Anna Culham, also a member of the choir, said, “It was fun.”
Broderick shared following the afternoon performance, “I think it was amazing. It was awesome. I was so excited to see some of these kids coming out and participating in something theatre minded, creative, and artistic.”
Commenting on working with NLCT, she added, “It was really important for us to try and spend some of the money that we get from the government through Canada Heritage and through Ontario Arts Council within the community and keep it here because as much as we absolutely adore our out of town presenters, that takes the money out of the community and this time we just wanted to give back. We have a fantastic local community theatre group and they put on a really good show, and they involved kids and members of the community and that gives everyone something really great.”
Broderick was thrilled with the sellout crowd but regretted having to turn a few people away from the afternoon performance as they were at capacity.
“The capacity crowd was awesome. Just surprised us. We set up for 130 and had to bring out extra chairs, so maybe 150-160, so it was really good,” she said of the afternoon show.
Commenting further on the performance she shared, “They did so good. It was so cute. I love seeing stuff like this. The readers and narrators were really on point and the kids were just enthusiastically involved. I love it.”
The Kids Kaleidoscope Entertainment Series will present their next show, the Kif-Kif Sisters, on January 19.
Broderick said they are always looking for volunteers, commenting, “They can contact myself, Nancy McCord, Shannon Brody, or Ashley McLean or anyone on the committee – send us a Facebook message and we’ll be happy to have you on board.” 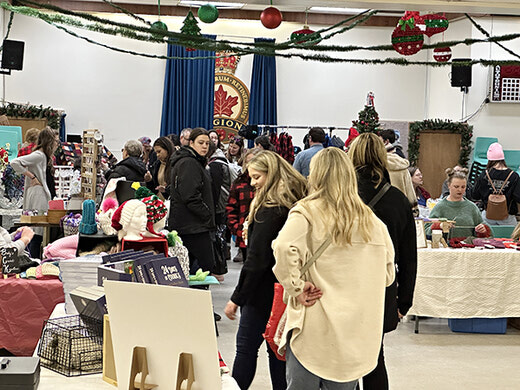 Moonlight Madness, a long-standing holiday shopping initiative of the Sioux Lookout Chamber of Commerce, was held this past weekend and according to participating merchants and shoppers, the initiative was a terrific success...