Tara Luz Danse’s bilingual presentation of Lés batons at the Sioux North High School Cafetorium on Oct. 27 combined music, dance, and theatre to leave audience members spellbound.
Presented by the Kids Kaleidoscope Entertainment Series as the first show in their 2022-2023 line-up, Kids Kaleidoscope Entertainment Series President Dorothy Broderick said, “We had a very good audience. Very patient and calm audience who were really enjoying the show.”
Anik Bouvrette, Artistic and Executive Director of Tara Luz Danse, told audience members, “Our work is all about imagination.” The contemporary dance company from Ottawa reimagined how “boomwhackers”, percussive rod-shaped instruments, could be used in a presentation, with performers using the instruments, accompanied by music, to recreate scenes of everything from watching tv, to outer space, to playing sports.
Commenting on this year’s four show season, Broderick said, “Part of our mandate is to try and encourage different languages among different age groups and to have affordable shows, which is why we dropped the price this year.”
She added, “We had so many grants through Canada Heritage and through Ontario Arts Council, we had the ability to be able to do a lot of the funding for these shows without having to require audiences to pay for every cent, which is excellent.”
The kids entertainment series is looking for volunteers. Anyone who may be interested is encouraged to speak with Broderick at Drayton Cash and Carry or contact them through their Facebook page.
“Our next show is November 26. We’re doing a Saturday show with a matinee and an evening show, and we’re presenting Northern Lights Community Theatre. So, we’ve chosen local artists.” 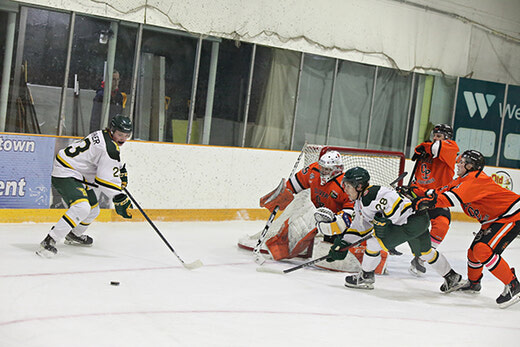