The federal NDP have called for an official inquiry focused, in part, into issues with polling stations during the recent federal election. In the Kenora riding, three First Nations communities (Pikangikum, Poplar Hill, and Cat Lake) found themselves with no polling stations at which to vote on Election Day, while the fourth, Grassy Narrows First Nation, had a station that did not open until 12:30 p.m., a full four hours late.

In a letter to the Commissioner of Canada Elections dated October 4, Anne McGrath, National Director of the NDP, writes, in part, “Canada’s NDP believes it is the responsibility of Elections Canada to ensure the enfranchisement of all voters, even and especially those in low-income communities, those living in Indigenous and rural/remote communities, and those living with disabilities. We feel strongly that the 2021 election represents a widespread failure on the part of election officials to follow election procedures. We request an inquiry into these matters to ensure Canadians can regain trust in our democratic institutions.”

Kenora MP Eric Melillo also began to learn of issues on the day of the election. As Melillo explained, “I first heard the concerns expressed on Election Day itself. I think it was on Twitter or one of the social media sites. People were making comments that they were not aware that they did not have a polling station. That was concerning, that they weren’t aware of that, it wasn’t clearly communicated.” Melillo went on to add, “I immediately called for an investigation by Elections Canada to find out where that breakdown was, and ensure that it never happens again. I am happy to know that they are going through that process. I’m not sure when they are expecting to have that completed but I’ll be watching that.”

Matthew McKenna, Media Relations for Elections Canada had this to say about the issue, “I don’t have much I can report on just yet as we are currently looking into things.  We understand that some electors in these communities were upset with the voting services offered and our communications around their voting options.  We are currently reviewing the facts and collecting information from the various stakeholders involved and will have more information once it is available.  We thank those electors who have come forward with their experience.  That’s the kind of feedback that we rely on to make sure that the voting services we deliver meet their needs and expectations. For background: returning officers negotiate arrangements for voting locally with the responsible administrators of First Nations reserves on a case-by-case basis; voting options and the timing of the vote varied based on local circumstances.” 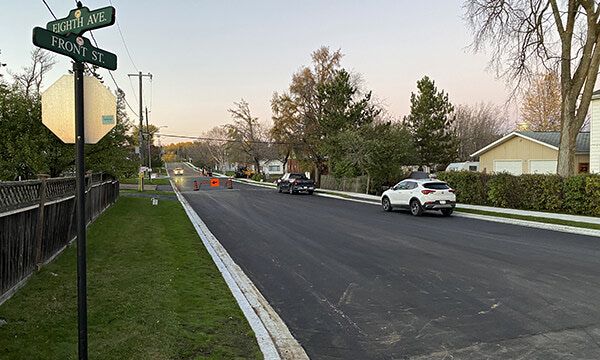 Paving of Eighth Avenue in Sioux Lookout got underway last week.
The Municipal Eighth Avenue Road Reconstruction project, taking place along Eighth Avenue from Front Street to Prince Street, will be substantially completed once the paving is complete...