Another Sioux Lookout tradition is quickly approaching, with this year’s Ice Candle Memorial Service set to take place on December 20. This year the event is being organized by four area churches, St. Andrew’s United Church, St. Mary’s Anglican Church, Sacred Heart Catholic Church, and Cornerstone Christian Fellowship. Due to the logistics of travel, only St. Andrew’s, St. Mary’s, and Sacred Heart will be hosting the in-person portion of the services, with Cornerstone’s service held in conjunction with the service at St Mary’s.

As Aileen Urquhart, who serves on the Planning Committee for St. Andrew’s United Church, explained, “We start with a prayer and a short reading. Then we have read off the names (of those who’ve passed). What we do is we get the records of all the people who have died the past year from the town, through the funeral home, and church records. Then we read out the names. Once we started doing the service at three locations, we did a third of the names at each place.” Urquhart continued, “There’s a table set up in each church with tea lights. So, someone will light the candles one by one as the names are read out. After that, there are extra candles so that people can come up and light a candle and name someone they are thinking of. There’s an opportunity at each of the churches for people to come up and light candles, for people they are thinking about. The only change over the past couple of years is that Cornerstone (Christian Fellowship) has joined in. It’s been like that for the past several years, and then various groups have been taking on the role of selling ice candles. This year it’s the Rotary that’s done that.”

With the Rotary Club of Sioux Lookout taking on the role of selling ice candles for placement at the cemeteries, they’ve been busy getting ready as well. For the Rotary Club this involves the preparation of approximately 300 ice candles which the club prepares ahead of the service as a fundraising tool.

Susan Barclay, Rotary Club of Sioux Lookout Treasurer, explained, “Ice candles are available to anyone who wants to purchase them. If they go to our Facebook page, they will find a link to make an order on-line, and I believe there are order forms at Fresh Market as well. Candles are $10 each and proceeds go to various community (projects).”

As Barclay explained, there’s a more to making a good ice candle than meets the eye, stating, “It’s a bit of a science and an art. We were down to the wire last year before the weather really got cold enough to actually make ice candles. I make (ice) candles in my garage, and what you really want are those controlled conditions. I want to be able to fill the buckets, go to bed, and go out in the morning and take the excess water out so that you have the shell of ice. That takes (at least) -20 overnight. if you don’t have that, then you are forever having to go out and check them, and it might take two or three days to finish a batch.”

Candles will be displayed at Sacred Heart/Northway Cemetery, Hillcrest Cemetery, or at one of three area churches, St. Andrew’s, St. Mary’s, and Sacred Heart.

As Barclay explained, the placement of the candles is up to the individuals who purchase them, stating, “We are not putting them on the grave sites per se. We have a sort of a ‘snow mountain’ and we put them on that, very much like last year. We will have an easel of some kind, with an acknowledgement of all the people whose names were added by people who have bought candles on their behalf. Anybody who then wants to take the candle off there and put it on a grave site, they are more than welcome to, if they know where to go and can get through the snow to do that. We also put them all around the cemetery along the roads and stuff like that as well. We also put some at each of the churches so if someone would prefer that they be at one of the churches then we put them there.”

“We light the candles on the evening of the service, just after dark. Most of our candles are supposed to be 30-hour candles, so they should last through the night into the next day, but if people want to go switch out a candle, they are more than welcome to,” Barclay continued.

Those wishing to purchase Ice Candles are encouraged to visit the Rotary Club of Sioux Lookout’s Facebook page at https://bit.ly/3ddmeKV for more information. 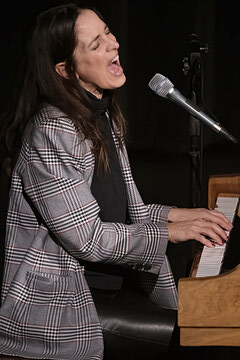 A fresh snowfall and slippery road conditions couldn t keep people from away from the final Sioux Hudson Entertainment Series show of 2021.
Canadian recording artist actress Chantal Kreviazuk, was welcomed to our community by a packed house...