A fresh snowfall and slippery road conditions couldn’t keep people from away from the final Sioux Hudson Entertainment Series show of 2021.

Canadian recording artist/actress Chantal Kreviazuk, in her second visit to Sioux Lookout (the first was in 2015), was welcomed to our community by a packed house of nearly 200 enthusiastic audience members eager for a night of camaraderie and song; and they were not disappointed.

Alyson Martin, Chairperson of the Sioux Hudson Entertainment Series, couldn’t have been happier with how the evening went, stating, “Chantal immediately engaged the audience with her music, storytelling, great sense of humour, and insightful intensity for the world and people around her. Her vocal range and what she is able to do with it, is nothing less than amazing, and the piano is truly an extension of herself with the notes and emotions expressed openly and with grace, through each beautiful song.” Martin continued, “We received so many positive reviews about the evening. In sharing their stories, it reinforced how music resonates for so many, and we don’t always know how and when something is going to strike a chord of our own.”

Kreviazuk performed songs old and new as well as some favorite holiday standards, at one point even encouraging a sing-along with her rendition of John Denver’s classic “Leaving on a Jet Plane”. The three-time Juno Award winning artist interspersed her set with entertaining and often quite amusing anecdotes from a long career in the music industry, and at one point even related her misadventures in trying to reach our community with limited gas and unreliable technology (she ran out of gas outside of Dryden after being assured by her GPS that she could fill up her vehicle at a service station in Wabigoon).

Despite the trials of the journey Kreviazuk brought a warmth and down home feel to her performance that was soaked up by an appreciative audience. Despite continued COVID precautions and the need to check vaccination status of all patrons prior to entry, the process went quickly and smoothly allowing the show to kick off just past the expected 7:30 p.m. start time and entertained an appreciative audience for nearly two hours.

A resounding standing ovation wrapped up a night with one of Canada’s premiere entertainers. 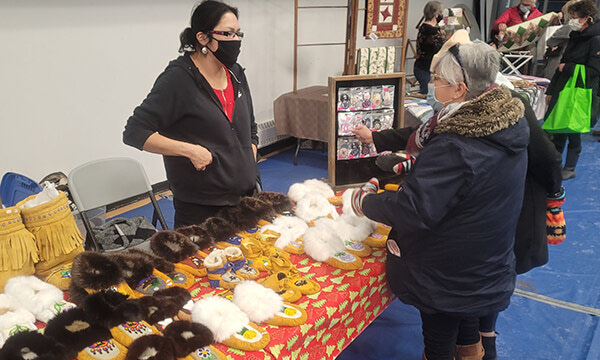 A time-honoured Christmas tradition in Sioux Lookout, the Christmas Arts & Craft Fair, was back to in-person shopping this past Saturday, Dec 4...