Approximately 600 Sioux Lookout and area students ventured through the Sioux North High School gymnasium to learn about future career opportunities during a career fair, hosted by the Sioux Lookout Area Aboriginal Management Board (SLAAMB), on Oct. 10.
Students from Sioux North High School, Dryden High School, Pelican Falls First Nations High School, and Sioux Mountain Public School had the opportunity to learn from, and ask questions, to 37 different companies and organizations in attendance.
During the career fair students heard from motivational speaker, and owner of Neechie Gear, Kendal Netmaker. The career fair also featured a performance from Edmonton country music artist, and member of the Bigstone Cree Nation, Chelsie Young as well as remarks from Kiiwetinoong MPP Sol Mamakwa.
“I believe that the students that we see, the students that are in the classroom, are the change makers of our society, the town of Sioux Lookout, and the riding of Kiiwetinoong,” said Mamakwa as he greeted participants and visitors.
The business and organization representatives at the career fair said students showed keen interest and curiosity throughout the day.
“It’s been good. I’ve seen more interest than I have at others, and I’ve done these for a lot of years. The kids really seem to be interested in what they want. The best thing, from my perspective, is all the businesses that are here. I think it’s a great turnout, and students seem to be engaged,” said Brad Everatt, Forestry Technical Specialist for the Ministry of Natural Resources and Forestry.
“It’s been a really nice interactive type of experience. The kids are asking fantastic questions, they’re following up with in-depth questions for us, it seems like they’re really happy to be here, and they are participating very nicely,” said Sgt. Jackie George, Recruitment and Media Relations with Nishnawbe Aski Police Service.
“It’s been really great. The kids have been pretty engaged,” said Christina Buzzi, Business Support Officer with Nishnawbe Aski Development Fund.
“It’s been really great to see students from Sioux Mountain Public School, Pelican Falls, and Sioux North High School. It’s a good opportunity to share with them some of the organizations that service them in our area, but also to try to encourage them to be thinking about possible employment opportunities in our region… The students have been really amazing,” said Desta Buswa, Education Partnership Program Liaison for KOBE (Keewaytinook Okimakanak Board of Education).
The booths featured hands-on learning, activities, and prizes for students, who said they enjoyed the event.
“It’s been good. We enjoyed the Lakehead University booth,” said Elizabeth Gray, grade 11 Sioux North High School student.
“All the booths have been good. I’m interested in policing,” said Mason Clace, grade 12 Sioux North High School student.
“I’ve been enjoying the career fair. I really liked the forestry booth,” said Zebiya Emmanuel, grade 12 Sioux North High School student.
After a potential strike by Canadian Union of Public Employees put the career fair in jeopardy, SLAAMB Assistant Coordinator Ziggy Beardy shared he was relieved to see the event successfully come to fruition.
“We would’ve had to cancel our event if the strike had taken place, but we’re glad it didn’t… The event really took off and all our objectives were met. We want to expose young people to career opportunities, job opportunities, and employers in our area,” said Beardy.
After hosting career fairs in Dryden and Thunder Bay, Beardy said SLAAMB decided to start hosting career fairs in Sioux Lookout. He said they already have next year’s fair scheduled with former NHL player Jordin Tootoo, who is the first player of Inuk descent to suit up in the NHL, booked for an appearance.
“We’ve been doing this for years now. We started out in Dryden a few years ago and then we went to Thunder Bay. When we first had our career fair in Thunder Bay we only had two booths. We progressed from there and began hosting it at Dennis Franklin Cromarty High School. The last two career fairs we’ve had there were amazing and very successful… We decided to host one in Sioux Lookout for the first time. It’s been a great turnout and a fantastic event,” said Beardy.
“We already planned another one for next year on October 15, 2020,” he added.
Businesses and organizations in attendance included Nishnawbe Aski Police, Shooniya Wa-Biitong, Ministry of Natural Resources and Forestry, Treasury Metals Inc., Domtar, Kwayaciiwin Education Resource Centre, Morgan Fuels, Shibogama First Nations Council, Wasaya Airways, Sioux Lookout Meno Ya Win Health Centre, Nishnawbe Aski Development Fund, Sioux Lookout Fire Services, North Star Air, Keewaytinook Okimakanak Board of Education, Newmont Goldcorp, Taranis Training, Equay Wuk Women’s Group, Nishnawbe Aski Legal Services, Perimeter Aviation, Lakehead University, Tikinagan, SLAAMB, Thunder Bay Broom & Chemicals Ltd., Sioux Lookout OPP, Northern Nishnawbe Education Council, First Step Women's Shelter, and Choose Life. 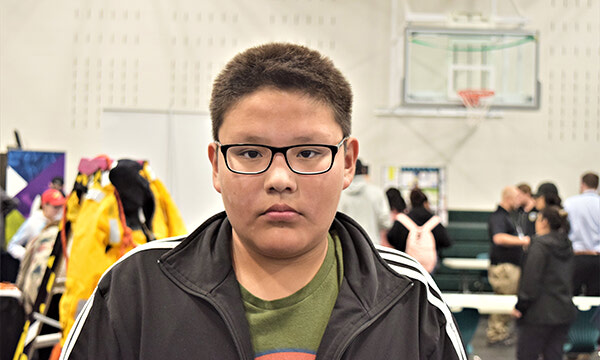 Question of the week: Students were asked what had piqued their interest during the SLAAMB Career Fair on Oct. 10.