Just try to remember what you had for dinner a week ago and you might come up blank, but ask Howard Lockhart about his years of playing basketball in the Texas of his youth and you’d best be prepared for details.
On February 19, Sioux Lookout resident Howard Lockhart was standing at center court of the Oscar Strahan Field House at Texas State University. He had been invited as one of the last surviving members of the 1960 NAIA Championship Team. The 1960 Bobcats were the only iteration in the team’s history to take the NAIA Championship, and while Lockhart stood at center court, holding up his hand to display his championship ring, he was met with a standing ovation.
Speaking with Lockhart from his winter residence in Texas, it seems obvious those years were a highlight of his young adult life.
When asked about his recent invitation to Texas State University, Lockhart went back to the beginning of his love for the game.
He recalled, “I played basketball in high school then went to Del Mar College and played there as well. I went on to what was then Southwest Texas State, now Texas State (University).
“In my second year, I had to sit out because I had to have major surgery to remove my lower right mandible and have a piece of my hip put in there to replace it. That was a tough thing to go through, and then a tough thing to get in shape from, but I managed to get all my courses in. When I started, they converted me from my center/post position to a guard. I was kind of the missing piece in the offence that they ran and so my senior year we went to Kansas City and finished in third place. We missed going to the finals by a basket thrown on the last game with about 10-12 seconds left in the game. Their star player had a two pointer with twelve seconds left! We were determined to go back, which we did in 1960. We went back to Kansas City, where they held all the NAIA tournaments, which was a 32-team tournament. We won the NAIA championship, which in those days was much more significant than it is today. Also, that team, my coach and three players including myself, were selected to go to Denver, Colorado, to participate in the US Olympic Trials. Nine of the guys on the NAIA team went on and played in the NBA.”
While in Texas he played alongside, and against, some players who went on to make names for themselves in basketball history. As Lockhart recalls. “First round we played Ohio State, which were the NCAA double champions that year. That included John Havlicek, who had a 16-year career with the Boston Celtics, and Jerry Lucas played on the New York Knicks, NBA Champions. And a little guy sitting on the bench, who didn’t get to play much, but made a pretty good name for himself coaching, Bobby Knight, was on that team.”
Lockhart continued, “Also in that tournament was the NCAA all-stars, which was probably the best amateur basketball team ever put together, including Oscar Robertson and Jerry West. Both had magnificent careers in the NBA. I was very fortunate to be able to play on that team because I was the guy that helped create an All-American high post man, as we called them in those days, Charles Sharp. Sharp was two-year NAIA All-American, and I was the guy that passed him the ball the most. Fed him, so to speak.”
Don Coryell is the Director of Athletics at Texas State University. Asked about Lockhart’s invitation to the game on Feb. 19, Coryell explained, “It’s always important for us to recognize our history, and the team (Howard) was on was obviously a national championship team. It was such a big deal for our university. It’s really important for us to remember that history, and Howard was obviously such a big part of that team and their success. We loved having him back on campus and loved the fact that we were able to reintroduce him to our fanbase.”
Coming back to the recognition he received at the Oscar Strahan Field House on Feb. 19, Lockhart still seemed a bit humbled by the reception he received, stating, “I was honored by being the only member (of three remaining) able to make it to that basketball game. I was introduced during that game and given a standing ovation, not because of me as much as it was because I was on the only National Championship Team that Texas State has ever had.”
Lockhart added, “My wife Sandra was introduced with me… I did flash my ring when I got introduced, that’s my national championship ring, and that kind of brought the house down. It was quite an honor. Seemed like I was royalty from the time I hit town until we left the building to go.” 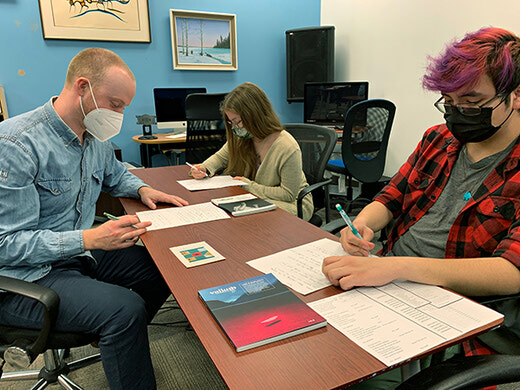 For some people the perception may be that poetry, or even of being a poet, may seem beyond their grasp. The medium may be perceived as having an air of refinement beyond the typical written word...