For some people the perception may be that poetry, or even of being a poet, may seem beyond their grasp. The medium may be perceived as having an air of refinement beyond the typical written word. Here in Sioux Lookout, however, one writer is trying to change that perception, one workshop at a time.
Writer/Poet Evan J hosted “Poetry! A Free Workshop for Beginners” at the Sioux Lookout Public Library on the evening of March 1.
Evan thought the evening went well, stating, “The workshop went great. Usually there’s only a few people out, two to five people is usually our poetry workshop attendance ratio. But it was great, generally whoever comes loves it... right so that was the case at this workshop as well. There was just the three of us and it was awesome, all poetry lovers, and one had also written a book, so very fun.”
If anyone has the bona fides to encourage more people to explore poetry as a creative outlet, it’s Evan.
“I am a writer,” Evan went on to relate. “I released my first book last year. I am also the fiction editor for Cloud Lake Literary Journal in Thunder Bay. I help organize the Winnipeg International Writers Festival and am currently writing a novel funded by the Ontario Arts Council and the Canada Council. I do poetry workshops right across the country, but I live in Sioux Lookout and work at the Adult Learning Centre.”
When asked what drew him to poetry as a form of self expression, Evan pauses, before replying, “I started doing it because of some great communities in different cities that I’ve lived in. And some great people helped foster my passion for it. Personally, I think its just another form of art, it works for me, its kind of like a mix between a form of catharsis and counselling, and artistic medium that brings me lots of joy.”
Asked about the perceived notion that poetry is a more elevated or elite form of self expression, Evan explained, “That’s not a bad way to kind of situate poetry within our social culture, and creative cultures. I think that’s the goal for both myself and the funder of my workshops, Vallum, (a non profit out of Montreal). Their whole goal is to help bridge that gap between how open and fee and accessible poetry actually is, to what people think it is. Every workshop I do is largely about bridging that gap. So, I will purposely go though like ten contemporary poems to look at the huge variety of content that these people are trying, experiments that these poets are doing. If you open it up to all the different forms, it can be really beneficial to (the participants) craft if they are just starting out or exploring poetry.”
When not sharing his love of the form with others, Evan has been keeping busy working on his first novel. When asked what he can reveal about the novel’s subject matter, Evan replied, “I like to say its going to be a novel about taxes…!  I’ve been sort of collaborating with several people for it. So, there’s a law firm in Kenora that’s helping with it as well as the Canadian Research Chair for Indigenous Law, John Borrows, who is helping with it as well. And a few other editors and things. We are hoping to get most of it done this year, so we’ll see how that goes.” Evan added, “I’d have to thank the Ontario Arts Council for giving me a big chunk of money to get it started and just this past Friday the Canada Council gave me the biggest grant you can get in Canada for a writing project. So, I’ll be able to write full time for the next few years thanks to them. But yeah, a novel about taxes!”
Asked about who his influences in the poetry world are, Evan is quick to respond, “I actually present a lot of these poets at the workshops. I think if you are in the poetry community, you’d know that Dionne Brand is generally the matriarch, the figurehead of our poetry community. And this (past) year it was tough to feel the loss of Lee Maracle, she was a huge, huge, influence on all Indigenous writers but all writers in general, so her loss is pretty tough.”
Evan pointed out that his poetry book “Ripping Down Half the Trees” published last year is available for purchase through most bookstores and is also carried in many regional libraries. 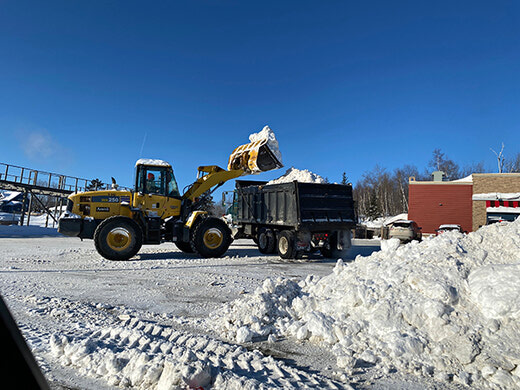 This winter continued its trend of bringing both frigid temperatures and significant snowfall amounts to the area through the month of February...