My friend Don Sanders died more than 30 years ago. He was a businessman of integrity and huge influence in Sioux Lookout, as well as a man of marvelous mischief and humor. I admired him immensely.
Among the many wonders I remember about Don is his story of the time he won $5000 in a lottery. His hardware store had one ticket unsold at deadline on one occasion, so he and some of his staff chipped in and bought it just as a lark. That ticket was a winner. Five thousand bucks apiece!
“Well,” he told me, “that was the most expensive $5000 I’ve ever had. Whenever Peggy and I wanted something we couldn’t afford we just shrugged our shoulders and said, buy it out of the lottery win.” And smiling like an imp, he concluded, “Over the years we spent that $5000 so many times…”
A few weeks ago I asked Mary to keep her eye out for a lid for my 13 inch cast iron pan. Told her I didn’t really like cast iron lids, so stainless steel would be my preference.
A couple days later I started looking online for a lid, and as many of my searches do, it led me to Cabela’s site. And, my lucky day, they just happened to have the perfect lid… well, almost perfect. The size was right, but it was cast iron. “Oh, well,” I thought, “it’ll work… Hey, wait, look at those frying pans on the same page.”
I gazed in a daze at the 20 inch pan that I had oogled, but resisted, many times over the past year. Nope. Couldn’t do it.
“But, look. There’s one just like it, except it’s only 16 inches,” I cajoled myself. So, that seemed reasonable, and one quick click placed it in my shopping cart, beside the 13 inch lid.
Then the doubt crept in. I don’t know if I have some hidden psychological need to own the biggest frying pan in the neighborhood, or if I really was making sense when I asked myself the question, “But what if you have lots of company and the 16 incher isn’t big enough?”
Never mind that I have a beautiful collection of pans of all sizes hanging on the wall already, including an antique hand made cooker created from a gold pan and another old, old monster crafted from quarter inch steel that’s so heavy I can hardly lift it.
After quite a long deliberation with myself I decided the best bet would be to just go ahead and get them both. So, another mouse click added the 20 incher to my cart.
Luckily, at the last minute, I remembered those guys would need lids, so, a couple more clicks and they were added.
Then, just about check out time, thank my good fortune, I just happened to notice some small cast iron individual frying/serving pans, and realized the potential immediately. Wouldn’t they be wonderful for cooking up one pot meals at camp, either on the wood stove cook top or in the barbeque – maybe even in the oven. Versatile, too. Could use them at home sometimes. That click was a given. The only debate was “how many?” Feeling that I should exercise some restraint, I settled on four. “Click!”
That ended my Cabela’s shopping for the day. I got that $15 lid I started out looking for. Somehow, those other odds and ends boosted the total to about $300, but, hey, I told myself. I haven’t had a drink of scotch for six weeks and consider all the money I’ve saved. I didn’t do the math, but it seemed about right.
For some reason I was reminded of my friend Don Sanders and his lottery win.
The pans haven’t arrived yet. But I have been thinking about those little individual serving pans. If they’re piping hot, where will we set them down. Seems like they might burn the table, and would probably scorch fabric place mats. So, I finally decided that maybe wood cutting boards would be nice. While in Dryden last week I checked some out at WalMart. The cheapest looked pretty nice, so I plunked four of them in my shopping basket. Right beside the cheap ones, though, were some much better looking bamboo boards and they weren’t an awful lot more expensive, so I added four of those to my basket, too, reasoning that I would probably have to order another four of the little serving pans anyway – in case of an influx of dinner guests.
Add another $94 to the cost of that 13 inch lid.
This morning I’m sitting at camp, surrounded by cutting boards, looking through the window at the sun rise across the lake, and another question has popped into my silly mind. “What if we have a table full of friends all eating out of their little individual cast iron pans and the wood place mats start smoldering in the middle of the meal?”
I’m thinking maybe I should buy some little spritzer bottles. We could keep them handy, just in case. I wonder if I should buy eight of them, or if two diners could share one, in which case I could get by with only four?
Again, my imagination has returned to Don Sanders. I can see the mischievous glint in his eyes as he sits across from me at dinner, then quietly raises his spritzer bottle and squirts me right in the face. “Oops!” he’d exclaim with his most innocent face. “Missed! Looked like your place mat caught fire and I was trying to put it out.”
Times like this make me wish I had drank a lot more scotch. Think how much more money I would have saved these last few weeks.
And, of course, fond memories of an old friend are always a blessing. 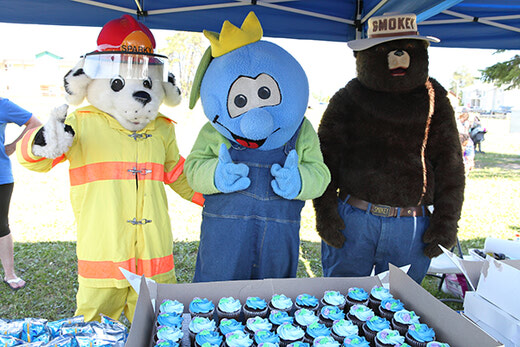 Blueberry Festival mascot Blueberry Bert is joined by friends Sparky the Fire Dog and Smokey Bear as he celebrates his 40th birthday on July 30.