A Sioux Lookout OPP officer has been recognized with a prestigious award for her work in the community.
Constable Andrea Degagne, Community Mobilization/Safety Officer for the Sioux Lookout OPP Detachment was recognized with the Ontario Association of Chiefs of Police (OACP) Award of Excellence in Community Safety, Wellness and Crime Prevention last month.
“It’s an extremely important award,” said Sioux Lookout OPP Detachment Commander Karl Duewel.
“Most recipients who receive this award have spent many, many years in policing, working within their communities. For Andrea to win this award with five years in our community is pretty special and I think it goes to show the great work and commitment that she has here.”
Sioux Lookout OPP Staff Sergeant Michael Kreisz nominated Degagne for the award, which was submitted on behalf of the commissioner of the OPP.
He said of her receiving the award, “It’s phenomenal. She’s being recognized provincially for the work she’s doing here in Sioux Lookout. It’s really cutting edge a lot of the relationships she’s building with people and some of the programs she’s helping to implement locally. It’s really nice that she’s being recognized for that at that level.”
“It’s special for us, it’s special for Northwest Region, and it’s special for the OPP as a whole because it’s not simply an OPP award. It could go to anybody, any police officer in the province of Ontario,” Duewel added.
The OACP Award of Excellence in Community Safety, Wellness, and Crime Prevention, according to OACP’s website, “Is presented in recognition of the accomplishments of police agencies and their community partners working together to improve community safety and well-being.”
Degagne was recognized for spearheading the creation of a Crisis Response program in Sioux Lookout and was instrumental in creating a Crisis Response Unit pilot project and worked with local organizations to develop a pre-charge diversion program. Degagne co-chairs the Sioux Lookout Healthy Community Task Force and sits on numerous other committees and tables of local service providers, advocating for vulnerable community members.
In presenting her the award, it was further stated, “Andrea connects with her community as the face of the Sioux Lookout OPP, educating about personal safety and crime prevention. She is a co-founder of Sioux Lookout Young Professionals Network, and a volunteer with the Sioux Lookout youth Club GSA, empowering often marginalized youth to coordinate events that promote diversity and tolerance within the broader community.
“Andrea is a natural leader who is committed to making Sioux Lookout an inclusive and safe place for all community members to live.”
Degagne said she was in disbelief upon learning she was to receive the award, which she said was a great honour.
“The award is for community mobilization and that really is just getting the right people at the table to respond to issues that are at hand and that we’re dealing with. The excellence in community safety, there are a number of different projects that we’ve been working on for the past few years that were recognized through this award… They recognized our creation of a mobile crisis unit and the work that I was able to complete in 2019 and translate a single year of funding into a full-blown project with multiple partners and connecting agencies. None of it could have been done without the support of our agencies and our partners. We’re very privileged to live in a community where there is so much concern for people’s safety and creating an equitable way of reaching resources,” Degagne said.
She added, “It’s an honour to be working with the community partners that we have and to be recognized as the head of these projects which are near and dear to my heart, it really validates what we’ve been working on and towards in the last four years… We couldn’t do it without our partners. Thank you so much to all those organizations.” 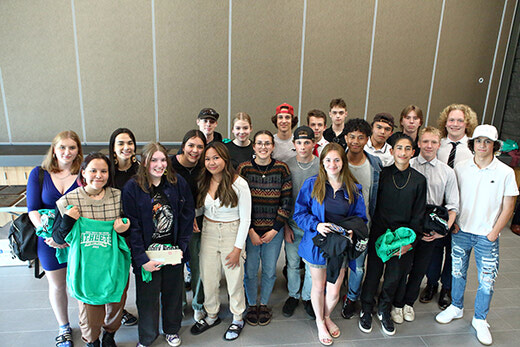 Sioux North High School (SNHS) athletes were recognized for their achievements this past sports season at the school's Athletic Awards Banquet on June 16...