Sioux Lookout Municipal Councillor Cory Lago (left) is joined by Municipal CAO Michelle Derose in proclaiming September 25 Franco-Ontarian Day in Sioux Lookout.
Reading from a proclamation signed by Sioux Lookout Mayor Doug Lawrance, Lago and Derose shared that the day “Officially recognizes the contributions of the Francophone community of Ontario to the social, economic and political life of the Province and the community’s importance in Ontario’s society.”
Following the reading of the proclamation, the Franco-Ontarian flag was raised at the Municipal Office.
The Legislative Assembly of Ontario enacted the Franco-Ontario Day Act, on May 18, 2010, proclaiming September 25th in each year as Franco-Ontarian Day. 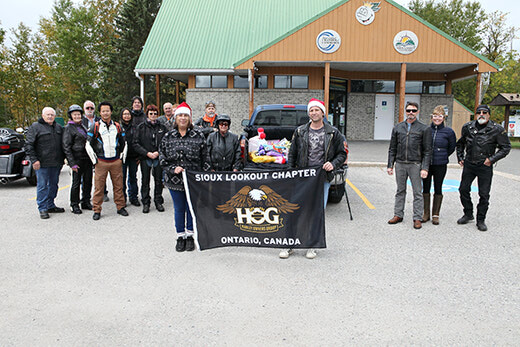 Motorcyclists continue tradition of giving back to the community
Tuesday, September 27, 2022
0 comments