Twenty-six teams took part in the 2022 Bombers Golf Classic presented by Morgan Fuels to support Sioux Lookout’s new Superior International Junior Hockey League team.
Bombers Forward Ty Lone was just one of the participants in the 18-hole, four-person team, best ball scramble, held on July 8 at the Sioux Lookout Golf and Curling Club (SLGCC).
“I thought it was really fun to be here, come and see the town, and see a lot of the fan support that’s going to be at the games this year. It looks like it’s going to be an awesome year with the backing of this town,” he shared.
“This course is really nice. I enjoyed it a lot. Coming out here with my family, it was nice to just get out and meet some people.,” he said.
Lone said he can’t wait to be a part of the Bombers’ inaugural season, “I’ve been itching to get on the ice here and I can’t wait. Every day it’s on my mind. I’m so excited to come here and play hockey.”
Austen Hoey, Bombers Director of Hockey Operations and SLGCC Manager commented of the day, “It was probably the nicest day of the year so far, that was just awesome. I really have to thank the volunteers. They did an awesome job as always. That’s kind of the great thing about this town, everyone came and helped and that was fantastic.”
Hoey thanked teams for participating, sponsors of the tournament for supporting the team, and SLGCC staff for making the tournament a success.
This year’s winning team, shooting a 57, were the Philly Flops. The team included Kendall Schulz, Ty Levesque, Cam Bailey and Ben Forbes.
“Honestly, lots of highs and no lows. We went out there with a mentality of having fun and that’s what we had today,” Schulz said, adding, “When one person hit a bad shot, another person came in clutch, at the end of the day, that’s all you can really ask for.”
Forbes said, “We left it a little loose. I had to hit the last drive on 18. It was a little nerve-wracking, shaking in the knees, but piped it down the fairway, kept it clean, boys were hitting their putts, couple long ones, it was real nice to see all day.”
Levesque added, “When we were coming down 18 there and Forbes piped his drive down the middle, I had some pretty good confidence as we were pretty low there. And then Kendall sunk that big birdie putt, which secured the win for us, it was a great feeling.”
Bailey said, “I just think it’s really exciting. For us guys, we’re all friends, and for us to win the tournament together… pretty proud of each other. It was a good day overall.”
All four members of the Philly Flops said they are excited to see the Bombers in action this fall.
“A lot of younger guys who had a really good day of golf. With this type of format, you have to make putts and they made putts,” Hoey said of the first-place team.
Second place was much harder to call, “Six teams tied for second place, which was really cool. We had to do a cumulative countback… that ended up finding us a second place winner in Team Ferra, which had one player from Sioux Lookout and three players from Ignace, so pretty sweet Ignace coming to support us,” Hoey said, adding, “The rest of the field had a great day and from the sounds of it, you can’t complain about a day like this.”
The tournament included an opportunity for one lucky participant to take a shot for a million dollars.
Local resident George Sakchekapo got to take the shot, but his ball landed short.
Tanya Tekavcic, another participant in the tournament, has been golfing regularly with Sakchekapo for more than 20 years and said it was exciting to see her friend get the opportunity.
“George had just got his cast off the day before, he’d had a fractured wrist,” she said.
Commenting on taking part in the tournament, she said, “You couldn’t beat the day. The weather was fantastic. I think the best part of it, other than money that they raised for the Bombers, is that we got to play with people that we don’t normally play with and made some new friends. It was awesome.”
Diane Martin, another participant in the tournament, said, “It was a great day of golf with beautiful weather. I was on one of two Morgan Fuels’ teams, and we thoroughly enjoyed the day and were pleased to help support the Bombers organization. Looking forward to having a Junior hockey team back in Sioux Lookout.” 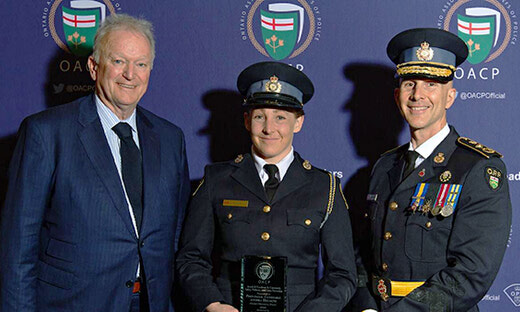 A Sioux Lookout OPP officer has been recognized with a prestigious award for her work in the community...