Requests for Proposals/Tenders will be issued over the winter for work to be conducted at Farlinger Park (town beach) in the spring.
Municipal Manager of Development Services Jody Brinkman shared that the work which took place this fall included the demolition of structures at Farlinger Park, subsurface water and sewer work, and preparation of the sub-base for the parking, curbing and the installation of the floating docks.
The Waterfront Development project will include a new outdoor stage, a boardwalk, solar lighting, a new washroomadministration building, new play structures, and a new floating dock system.
At a public meeting earlier this year, members of the public expressed concerns about contamination at the beach. Brinkman stated, “In regards to previous uses, the site has been well investigated and evidence has not been found to support the claims of dioxins resulting from the burning of creosote ties.”
According to Canadian National Railway consultants, a recurring sheen at the beach is biogenic in nature and not harmful to humans.
In his report to Municipal Council on August 22, Brinkman informed, “In 1987 a large diesel fuel (LNAPL – Light Non-Aqueous Phase Liquid) storage tank on CN property across the road from the Town Beach caught fire and released approximately 1,500,000 L of LNAPL. Some of which was burnt or infiltrated into the ground. An LNAPL recovery system was installed onsite in 1996 and was operated until 2008 due to minimal recovery amounts. In total approximately 600,000 litres of LNAPL was recovered. The Municipality has been working with CN and their environmental consultants, Ministry of the Environment, Conservation and Parks (MECP), Northwest Health Unit (NWHU) and Pinchin (Pinchin Ltd, one of Canada’s largest environmental, engineering, building science, and health and safety consulting firms) – the Municipal environmental consultant.
“We have had monthly meetings with all stakeholders over the last few years to discuss the monitoring results, remediation efforts and the waterfront development. Several studies, reports, boreholes and monitoring results have been completed and reviewed by the stakeholders.”
To address the biogenic sheen, a biosparging system will be incorporated into the Waterfront Development project.
“The Municipality is working with CN to ensure that any costs associated with future site work arising from remediation efforts, if required, will be the responsibility of CN,” Municipal CAO Michelle Larose informed.
The Waterfront Development project is anticipated to be complete by late summer or early fall.
Further Waterfront Development project details are available at: https://siouxlookout.civicweb.net/document/18833. 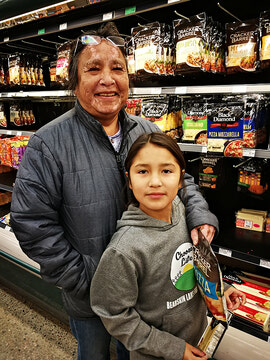 Question of the week: How have you been dealing with the return of winter weather?