The Wataynikaneyap (“line that brings light”) Transmission Project, which is comprised of 24 First Nations communities working together to connect 17 remote communities currently powered by diesel to the provincial power grid, is one of the of the most ambitious construction projects the north has seen.
Margaret Kenequanash, CEO of Wataynikaneyap Power shared, “The current status on the project at the moment is that we have the transmission line’s right of way clearing at 86 percent, this is as of March 19 data. The foundation structures are at 56 percent. That means 2732 foundations done. There’s ongoing work and this will probably ramp up with the assembly of towers, which are currently at 50 percent, or 2463 complete.”
Reaching this construction milestone is no small feat given the difficulties the past several years of the COVID-19 pandemic have created.
As Kenequanash notes, “I think with the project we are working on, COVID was never part of the plan. So obviously that has presented some challenges. But we have managed to work with Valard (Construction) to ensure the health and safety of the communities and also continue to work on the project and progress it.”
One community is currently connected to the provincial power grid through the “line that brings light.” That number is expected to grow this year.
“Pikangikum is the only one connected so far, but the next ones scheduled are North Caribou, and Kingfisher Lake, and the commissioning of the Dinorwic and Pickle Lake switching stations and substations. For North Caribou and Kingfisher Lake, the target date is August. That’s obviously subject to weather,” Kenequanash noted. She continued, “There’s been a bit of a push back in the schedule. As I say, there’s been some challenges that we’ve been facing over the course of this project, so there are a number of communities that have been pushed back to be connected until spring of 2024. But the target is that most of the communities be connected in 2023.”
While the completion of this project is expected to have a lasting positive impact on the communities it services, the hope is that the environment will benefit as well, as Kenequanash notes, “Our communities burn approximately 25 million litres a year, diesel. Over a period of 40 years, it adds up to 6.6 million tons of avoided GHG (greenhouse gases) emissions. That’s comparable to 35,000 cars off the road. I think that’s a positive approach to clean energy.”
“This project is very important to our people as it will provide reliable energy to our First Nations,” Kenequanash stated.  “As well, there have been guiding principles that have been established by our leadership, setting our expectations in terms of how Wataynikaneyap must conduct itself in the homeland of our people. Respecting our people, our rights on the land, our Aboriginal treaty rights, water, environment, animals. All these things we are trying to work through as we move along as well.”
Asked about the ground-breaking nature of the project, Kenequanash concluded, “I’m not aware of, in Ontario anyway, this number of First Nations coming together to mandate a project, as well as to work on a project together that has a vision to it. This is probably one of the most unique and important projects in the region at the moment, that I can think of.”
Mary Kita, Wataynikaneyap Power Manager of Communications, provided the following background on the project, “Working with all these communities, energy has been a regional issue for about 30 years. So, it’s been a long time coming. The Central Corridor Energy group was sort of the start, back in 2008.
“That was basically where we came up with the mandate that the north was going to look collaboratively at the energy issue, in some sort of way that the communities would own the infrastructure.
“It was determined that the best path forward was a transmission line. It was around 2015 when 20 of the First Nations (now we have 24) signed an agreement that they were going to work together to build this line.”
Kita concluded, “We got the funding announcement in 2018. Pikangikum was one of our communities, but it was actually energized back in 2018. They were part of the overall project, but their need was so dire at the time that they just couldn’t wait. So, they were energized in 2018, just before Christmas.
“Otherwise, construction
on the rest of the line started in the summer of 2020. July 2020 the first tower went up in the Sioux lookout area, the three years since has just been full speed ahead construction.” 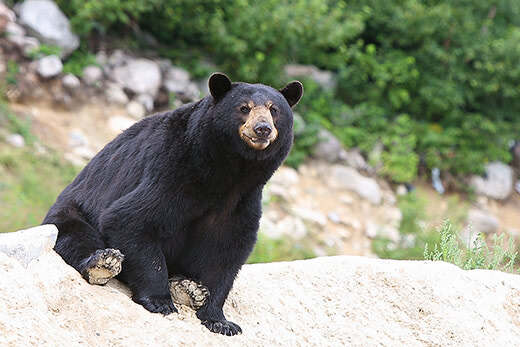 The Ministry of Northern Development, Mines, Natural Resources and Forestry and the Ontario Provincial Police (OPP) are offering some simple tips to keep human-bear interactions at a minimum as black bears begin to emerge from their winter hibernation...