The Ontario Government has provided the Wataynikaneyap (Watay) Power Transmission Project a $1.34 billion loan for the project’s construction costs, enabling the project to continue moving forward.
“Wataynikaneyap Power is a licensed transmission company, regulated by the Ontario Energy Board, and majority-owned by a partnership of 24 First Nation communities in partnership with Fortis Inc. and other private investors. The 24 First Nation communities established Opiikapawiin Services to lead the community engagement and participation for Wataynikaneyap Power LP. FortisOntario Inc., a wholly owned subsidiary of Fortis Inc., acts as the project manager through its wholly owned subsidiary, Wataynikaneyap Power PM Inc.
“To connect remote First Nations communities to the electrical grid, Wataynikaneyap Power will develop, manage construction, and operate approximately 1,800 kilometres of transmission lines in northwestern Ontario. The project will reinforce the existing transmission grid to Pickle Lake and will expand grid service north of Pickle Lake and Red Lake,” a Watay Power news release explained.
“Wataynikaneyap Power CEO, Margaret Kenequanash, along with the Chiefs of the 24 First Nations, Barry Perry, President and Chief Executive Officer, Fortis Inc. (“Fortis”), Anne Scotton, Regional Director General at Indigenous Services Canada, Government of Canada, Carolyn Calwell, Assistant Deputy Minister, Ministry of Energy, Northern Development and Mines, Government of Ontario, and the First Nations LP (“FNLP”) Executive Council gathered together to celebrate this momentous occasion,” the news release went on to state of the Oct. 29 announcement.
“Today marks a significant step in the unprecedented First Nations-led Wataynikaneyap (Watay) Power Transmission Project to connect remote First Nation communities to Ontario's power grid.
“With a projected completion date by the end of 2023, the Watay Power Project will be the largest Indigenous-led infrastructure project in Canada, and most far-reaching First Nations grid connection in Ontario's history. When complete, the project will provide over 14,000 First Nations people in northwestern Ontario with a clean, reliable and affordable supply of electricity,” a Government of Ontario news release added.
“This Project will supply clean, reliable energy to thousands of residents across the region and will eliminate the financially unsustainable and environmentally risky reliance on costly diesel generation. It will also create an estimated 769 jobs during construction, close to $900 million in socio-economic value, along with many other new economic opportunities,” a Watay Power news release further informed.
Pikangikum First Nation was the first community to be successfully connected through the Watay Power Project last December.
“The project has strong financial, social, and environmental benefits for First Nations, Ontario, and Canada. The project will lead to direct employment and economic benefits for northwestern Ontario, including First Nation community members. Watay Power expects that construction of the project will create an estimated 769 jobs,” the Government of Ontario news release further stated.
“Indigenous Peoples are very patient and resilient – they have been talking about energy for 28 years,” said Margaret Kenequanash, CEO of Wataynikaneyap Power. “Today we place our mark on history as we work towards a shared vision which will form the foundation for our future generations. We celebrate the moment of truth today but tomorrow our commitment to the tasks before us becomes very real as the work begins in our effort to connect our First Nation communities on time.”
“Ontario is committed to working in partnership with First Nations and government partners to connect remote First Nation communities to the electricity grid, remove barriers to community growth, and spur economic development,” stated Minister of Energy, Northern Development and Mines Greg Rickford. “These loan agreements signify Ontario's commitment to the project's success and are an important step for construction to proceed.”
“Today marks a significant milestone for the 17 First Nations communities who will be connected to the main electricity grid in Ontario for the first time,” said Barry Perry, President and Chief Executive Officer, Fortis. “We are proud to work with our First Nations partners to bring cleaner and more reliable energy to their communities.”
“I would like to recognize the hard work of the Project Team on achieving financial close so we can issue the Notice to Proceed for the construction of the line that brings light,” said Eliezar Mckay, Chair of FNLP. “This significant milestone is only possible through cooperation and with the patience and support of our people as part of the bigger vision of building and owning a transmission line - we share in the excitement of this historic occasion.”
“The Notice to Proceed follows the financial close for the Project. Construction and project financing are now in place to fund a total project cost of up to $1.9 billion. The Project is targeted for completion by the end of 2023,” Watay Power clarified.
“Valard is the engineering, procurement, and construction (“EPC”) contractor for the Wataynikaneyap Power Transmission Project. The company was awarded the contract to design, procure materials and equipment, and build the 1,800 kilometres of transmission lines on September 6, 2019,” Watay Power explained.
Barkley Adams, Valard’s President & CEO commented, “Valard has successfully and safely engineered and constructed some of the largest electric transmission projects in Canada.  We want to thank Wataynikaneyap Power for selecting our company to safely execute on this project, and we look forward to working with the communities and beginning work immediately.” 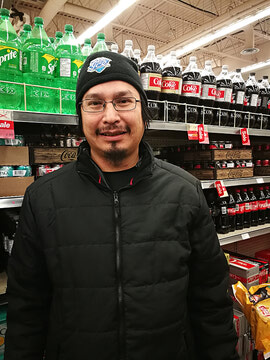 Question of the week: With Remembrance Day approaching, do you have any messages for Canadian veterans?