Sioux North High School (SNHS) struck gold and silver at the NorWOSSA (Northwestern Ontario Secondary Schools Athletic Association) “AA” Championships, which SNHS hosted on Nov. 15.
The SNHS Warriors junior girls basketball team defeated the Dryden High School Eagles 33-25 in the semi-final to advance to the final against the Fort Frances High School Muskies, where they fell to the Muskies 36-18 to earn silver medals.
Warriors junior girls basketball team Head Coach Shawn Hordy said it was a great season.
“Starting the year off we played Fort Frances in our first game, and they handed it to us pretty easily. We made a goal that we were going to see them in the final and we did.”
He added, “The year, it was pretty impressive. We had six new Grad 9’s on our team, four of them were starters. To watch them grow and do as well as we did throughout the year was excellent.”
Commenting on the final against the Muskies, he said, “We had played a heck of a game against Dryden earlier. It was back and forth. It was a battle. We laid everything out on the line in that game to make it to the finals. In the finals we were playing undefeated Fort Frances. We knew it was going to be a task. We came out, we were trying our hardest, but ultimately, they were the stronger, fresher team. It is hard playing two games of high competitiveness in one day and it took its toll on some players.”
“All around very proud of the girls and the effort and the practice they put into getting to this point,” he said, adding, “To finish second overall is a great feeling and looking forward to next year.”
The SNHS Warriors junior boys volleyball team defeated the Fort Frances High School Muskies in three straight sets to advance to the final against the Beaver Brae Secondary School Broncos, who they defeated three sets to one to earn gold medals.
SNHS Warriors junior boys volleyball Coach Jason Suprovich shared, “Our team we build from the ground up. We set goals, we went to two tournaments and this. As a team we set a goal to win this, and we did. The team came together, worked hard, found the right attitude and drove towards the right end goal.”
SNHS Warriors junior boys volleyball Coach Mario Boivin said, “Our game this morning was played really well. Showed a lot of character and coming together.”
Suprovich said of the final, “I think the kids just really wanted it and showed us that they really wanted it. They knew what they had to do… they knew how they had to play. I’ve had confidence in this group all year long that they were the best team in this league, and they just showed it.”
The SNHS Warriors senior boys volleyball team went undefeated this season, finishing the regular season in first place, earning them a bye into the final where they defeated the Fort Frances High School Muskies three sets to one to win gold.
SNHS senior boys volleyball team Head Coach Talbot Johnson said of the final, “I told our team just to take it one point at a time, stay focused, and whatever happens, happens.”
After the Muskies took the first set of the game, Johnson said he told his team, “They’re here to win also and they’re trying to take our medal,” which seemed to be all the motivation the team needed.
The SNHS senior boys volleyball team advanced to the NWOSSA championship, which was played at SNHS on Nov. 18 and 19, where they faced the Westgate Collegiate and Vocational Institute Tigers from Thunder Bay.
The Tigers advanced to OFSAA, defeated the Warriors two games to zero in a very close best of three game championship. The Warriors were awarded NWOSSA silver medals.
NorWOSSA President Janine Lavoie is also the SNHS Athletic Director.
She shared, “It’s new for us. We transferred to the “AA” league four or five years ago, so this was our first hosting of the court sports for the NorWOSSA “AA” league. It ran really smoothly. Pelican Falls was a tremendous help with helping us host the volleyball semi-finals.”
As SNHS Athletic Director, she said of the school being represented by three teams at NorWOSSA, “I have to credit that to our coaching staff. All of our coaches are really dedicated and put a tremendous amount of effort into developing our teams. When we knew we had a chance to have three teams in the finals it just pumped the whole school up… and then in the semi-finals to see both of our teams advance to the final to join the Senior Boys was fantastic.” 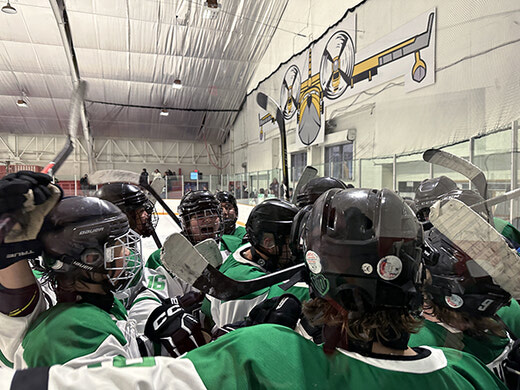