The Sioux North High School (SNHS) Warriors boy’s hockey team is heading to OFSAA (Ontario Federation of School Athletic Associations) once again after edging the Fort Frances Muskies 3-2 in an overtime thriller that was reminiscent of a year ago.

After losing the first game of the best-of-three NorWOSSA (Northwestern Ontario Secondary Schools Athletic Association) final series 3-1 in Fort Frances, the Warriors stormed back to win game two in front of a packed home crowd, 5-1. The Warriors then went back to Fort Frances where they claimed NorWOSSA gold once again, but for the first time in SNHS history.

After the thrilling overtime victory, both the players and coaches were still trying to soak in the storybook season they’d had.

“It’s surreal. It’s one thing at the beginning of the year, when you look at the roster, to think that you have a chance and what it takes, but it’s a long season and a lot of things have to happen for that to happen… There’s almost more pressure, I believe, when you’re expected to do it. Last year was a big surprise and we were the underdogs but, this year, I think everyone expected us to do it and it’s a different kind of pressure. They responded well,” explained head coach Karl Schulz.

“It was amazing. It’s a great story and I couldn’t have had it any other way,” shared goaltender Jaden Marshall.

“I’m really proud to be a part of this team right now. I think it’s so emotional and harder fought for because it’s a lot of our last years’ here, so we really wanted this and I’m glad we all came out of it with the win… I couldn’t have asked for a better team to be on my last year of high school with, and I couldn’t have asked for a better outcome. This win is huge for all of us,” said defenseman Ben Forbes.

Defenseman Mathew Binguis shared that the NorWOSSA gold really hit home for him because he’s been playing with some of his teammates for so long.

“It makes it so much sweeter because I’ve grown up with these guys since we were younger and I’ve had Karl as a coach since I was a little guy. It made it feel so much better because it feels like we’re family. Growing up, we had a lot of championships. We won as a team with Karl and then this last one just makes it the best one. I even cried after we won and I was on the ice for the goal. It was really emotional, and I couldn’t believe it,” he explained.

One of the key areas to the Warriors success was having consistency between the pipes. Marshall opened up the playoffs with back-to-back shutouts against the Beaver Brae Broncos in the semi-finals, and he only allowed a total of six goals in their five playoff games. When asked about providing timely saves and consistent success, Marshall shared that the stats aren’t for him.

“It’s for the team not for me. I have to play big for them, the community, and everyone that’s involved with the team. It’s all for them,” he said.

Coach Schulz agreed that the team wasn’t just playing for themselves.

“One of the things we talked about from the start of the year was we were Sioux Lookout’s team. We were playing for our town. Our town deserves to be winners because we are winners. When everybody came out at home, you can’t describe the feeling but I know how much it meant for the boys and I know how special they feel. I hope the town is as proud of them as they are of the town,” he shared.

For a lot of players on the roster the OFSAA tournament will no longer be a new experience. Returning players echoed a similar, tunnel-visioned mindset that’s focused on winning it all.

“I think last year we were kind of intimidated when we went. We didn’t know what to expect or how to prepare, but now we’re ready. We’re ready to win,” said Marshall.

“We’re looking for more wins this year. We know there’s going to be decent competition there and it’s going to be a great experience no matter what but, obviously, we want to come out of there with a few more wins. Our goal is to win it all, so we’ll have to work for that,” shared Forbes.

“We won’t have the nerves going in. We’ve been there, we’ve done that, we know what’s waiting for us, and we know we can do it. You’re going to see a focused, driven team. We’re not just going there for a participation award. We’re going there to win,” said Schulz.

This year’s OFSAA tournament will be taking place in Kincardine, Ontario from March 19 to 21. 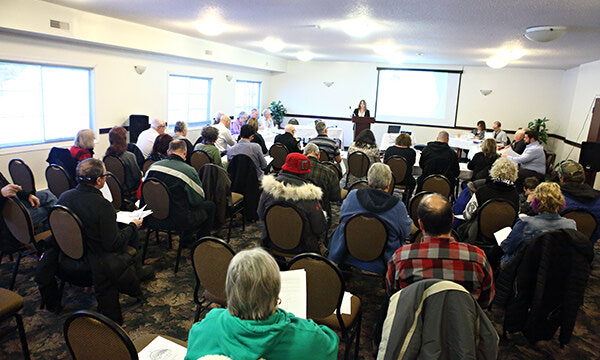 Sioux Lookout Municipal council has directed Municipal staff to finalize the 2019 Municipal budget with a 1.7 per cent rate increase.