Sioux Lookout’s 13th Walleye Weekend fishing tournament, which offered fishing enthusiasts an opportunity to challenge themselves and vie for top prizes, was a sellout with 75 teams taking part.

The catch and keep tournament, with a daily limit of four fish per team, was held on Minnitaki, Abram, Pelican, and Botsford lakes on June 12 and 13.

The Walleye Weekend committee, in association with the Sioux Lookout Anglers and Hunters group, puts on this tournament.

Walleye Weekend Co-Chair Christine Hoey said, “We are so excited to be together and doing something again.” She added last Saturday, “Because of the weather and the way that the water is, the walleye are biting. So, we’ve had a lot of good fish come in. The teams have weighed a lot of good weight.”

A Walleye Weekend participant and Red Lake resident Jerry Woods, who attended the tournament with his wife Dar Woods, said that he was happy to be able to safely go out and fish, especially with the dramatically reduced number of fishing tournaments in the area due to COVID. “We’ve been doing this tournament for about six or seven years now, and we really enjoy it. The guys and gals put on a great show here and it’s a fun time,” he said.

Dylan Marino, who has roots in Hudson, but now lives in Ear Falls, said he has been taking part in the tournament for three or four years now and said he caught some nice fish and had a great time.

“It’s very well organized. I usually take part in the tournament every year with my son, so it’s some time for us to spend together,” he said.

Crawford said he was happy the event was back on this year, “They do a very good job.”

Brandon Kamm from Dryden commented, “Everyone is so friendly and the fishing is great. It’s a no brainer. It’s only an hour away from Dryden. It’s been awesome!”

$21,000 was up for grabs in the tournament, with teams finishing 1st through 20th place receiving cash prizes.

Second place went to Jason Murphy and Kelly Wilson, with a two day total weight of 20.79 pounds. They took home $3000.

Coming in third was the team of Tanner McDonald and Kyle Hamilton, with a two day total weight of 20.57 pounds, netting them $1800.

Todd and Jason MacDonald had the big fish for day 1 at 6.14 pounds.

The big fish for day 2, at 5.69 pounds, was caught by Brandon Kamm and Dale Barker.

Participants were able to take their catch home, or donate it to the Sioux Lookout Meno Ya Win Heath Centre Miichim kitchen.

Hoey said that the tournament safely hosted participants from across northwestern Ontario, with teams from other locations, such as Manitoba and the United States being unable to attend due to COVID restrictions. She added that the MNRF helped ensure everyone observed fishing guidelines.

“We love the new dock system that the town put in. The new marina is working perfectly, because we can handle a lot of people, and we are hoping to just be able to have the community come back. Because normally, people from town would come down and watch all the weighing in, and people chat and talk and it’s a really nice social event. So, we knew that wasn’t allowed this year. We just have the volunteers and the anglers. But, next year we are really looking forward to having it open back up to the public,” said Hoey.

She added, “The tournament went great considering that we had to cancel last year because of COVID and we’re still in COVID right now. We took the chance to have it because we knew we could social distance and we could still have people enjoy their weekend and get out and everybody seemed to have a good time. We had some really great weights this year. We had a great group of volunteers and a great group of anglers who come every year.”

She said the tournament is good for local businesses with anglers picking up minnows, gas, food, and staying overnight.

“I saw the boats at the different hotels in town, some of the tourist camps that wouldn’t have had tourists at this point, so yeah, I think everybody benefits from this for sure and next year we’ll just be coming back bigger and better.”

Hoey thanked Madsen GM and Mascotto’s Marine Ltd. for supporting the event this year, as well as all the volunteers for their efforts to make it a successfully smooth event. 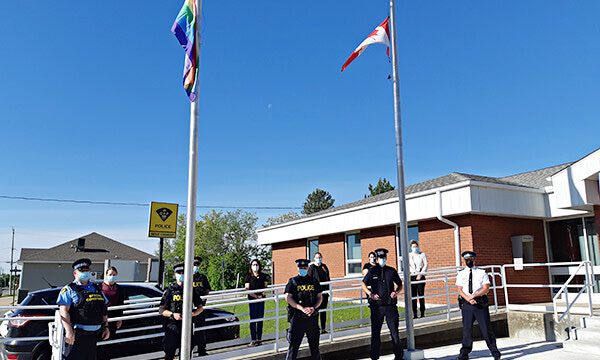 Supporting Pride June is Pride Month in Canada. At the