The 12th annual Sioux Lookout Walleye Weekend fishing tournament netted a full field of participants with 75 boats participating in the action on June 8 and 9.
Tournament organizers and volunteers said they were pleased with how this year’s tournament turned out.
“We got a lot of great feedback from participants. It’s always good. We have a good group of volunteers, and we have good sponsors. Participants are always happy to come out for this tournament and enjoy themselves,” said Cory Lago, President of the Sioux Lookout Anglers and Hunters and Director of the Walleye Weekend.
“We were really excited. We get a good group, with lots of people who come back every year. We also get a lot of people from out of town who come back, and they’re making it a three and four day event now. It’s not just the Saturday and Sunday. That was the whole point, to try and attract some anglers to the area in early June,” said Christine Hoey, Co-Director of the Walleye Weekend.
“I think it was absolutely amazing. It was a good turnout as usual. It’s a great event in Sioux and it’s a fun time to socialize with everyone,” shared Sioux Lookout Anglers and Hunters treasurer, and Walleye Weekend volunteer, Tiana Korobanik.
The tournament, which is put on by the Walleye Weekend committee in association with the Sioux Lookout Anglers and Hunters, was sold out by Christmas of 2018, which put teams on waiting lists.
Teams of two fished the MAPB (Minnitaki, Abram, Pelican, and Botsford) lakes over the course of the tournament.
Teams were allowed to turn in four fish per day, three under slot size, and one over.
This year’s winning team, with a two day total of 20.98 pounds, was the team of Kyle Hulsey and Jeremy Bryan. First place netted them $6000.
Coming in second was the team of brothers Todd MacDonald and Jason MacDonald, with a two day total weight of 20.49 pounds. Second place earned them $3000.
Coming in third was the team of Tyler Hogan and Kelly Hogan, with a two day total weight of 19.33 pounds. They earned $1800.
Dylan Husak and Brandon Stanley had the big fish of the tournament for day one, weighing in at 6.32 pounds.
Mark Vermette and Sarah Dodic had the big fish of the tournament for day two, weighing in at 5.07 pounds.
Hoey explained that the tournament continues to welcome more and more people from outside of Sioux Lookout.
“There are three or four teams who come from Minnesota now. We also see participants come in from Winnipeg, Red Lake, Ignace, Vermilion Bay, Dryden, and Thunder Bay. It’s a good mix. Some of them will be people who are local and they’ll bring someone in as a partner from out of town,” she said.
Jerry and Dar Woods, who have been coming to Sioux Lookout from Red Lake to participate in the Walleye Weekend for six years now, shared that they enjoy coming to Sioux Lookout yearly to take part in the Walleye Weekend, which is the first of about eight tournaments that they usually participate in yearly.
“It’s great and that’s why we come here. It’s the first tournament of the year, so everyone’s always excited. The fishing is good,” they said.
“It’s fun. We really have a great time here. Last year we were in sixth place and this year we took 22nd, but that’s fishing,” they added.
Lago and Hoey thanked sponsors of the event and their group of volunteers, who they say are integral to the tournament running smoothly each year. 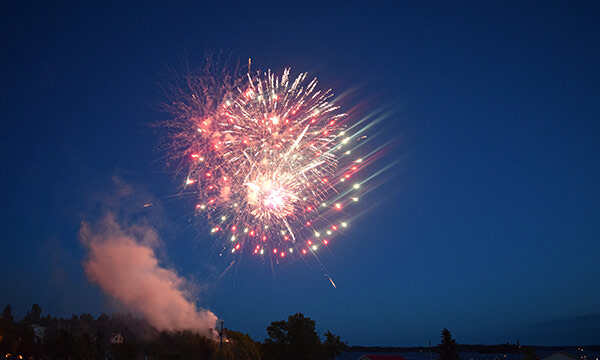 The Sioux Lookout Lions Club is calling on residents and businesses to support them in purchasing fireworks for this year s Canada Day celebrations.