At the end of the month, Sioux Lookout and area youth will have the opportunity to register for a new volleyball club in town.
Club organizers said the goal of the club is to provide young players more opportunities to develop their skills while getting more playing time after school sports come to an end.
“This is a non-profit club with certified volleyball coaches that volunteer their time for the youth of this community to give back and give them something positive to do in the spring… The youth will be given opportunities to participate in something I believe they will enjoy and hone in all their athletic skills in a sport they maybe haven't tried. I encourage everyone to come out and try it out,” said Kevin Savoury, who is one of the clubs organizers and currently coaches the Sioux North High School senior girls’ volleyball team.
“It will be from grades four to 12. We’re going to split them up from grades four to six, seven and eight, nine and ten, and 11 and 12… It’ll be one or two practices a week and then there are tournaments that are in the Manitoba Volleyball Association, so that’s what we would be a part of… I’m hoping some teams will travel, but it’s not the goal right now. We just want to get it up and running… We will be contacting tribal councils in hopes of getting more kids from the north to join us in this sport as well. I want to encourage all to come and participate,” he said.
Savoury, who grew up playing volleyball in Dryden where he won a AA OFSAA (Ontario Federation of School Athletic Associations) gold medal, said he was part of a club in Dryden that found success. He’s hoping a club in Sioux Lookout will help provide youth with more opportunities to play sports locally.
“We had a club in Dryden that I was a part of as well, and it went really well so we ended up playing volleyball for around six months of the year instead of just two. I think it helped develop athletes… Some of our volleyball athletes are currently being recruited to play in the states and I thought it would benefit them to play the sport for more of the year,” he said.
“I feel there is a need for more sport in this community. It's good for youth to be involved in something outside of the high school. Sports are so good for kids. It impacts their mental health, confidence, resiliency, problem solving skills, coping strategies, teamwork, and communication skills,” he added.
Savoury said the local club will be named the Sioux Thunder, which represents the thunderbird and has tribal affiliations with the Sioux, Ojibwe, and other tribes.
Registration will be taking place at the Rec. Centre Feb. 24 to 26 from 5 p.m. to 8 p.m.
“Everyone who signs up will be given a Sioux Thunder shirt. Volunteers are always welcomed to help out at practice, setting up and more. Our email is [email protected] for more information. We will have flyers and posters in Sioux North High School, Fresh Market Foods, Drayton Cash and Carry, and the Rec. Centre,” he said.
Early registration for youth minor sports this summer, such as soccer and baseball, is already underway. Early registration began on Feb. 10 with regular registration beginning on April 1 and late registration taking effect on April 24. The season will officially start on May 25.
Rylie Wills, Assistant Recreation and Culture Manager, said recreation programming currently available, and that will remain available, includes drop-in tennis and pickleball at the Rec. Centre. She said they’re trying to establish a new bocce league as well as bring tournament opportunities for pickleball and other sports. There will also be a slo pitch league.
To register, or for more information, go to the Rec. Centre or contact the Recreation and Culture Department at 737-1994 and [email protected] 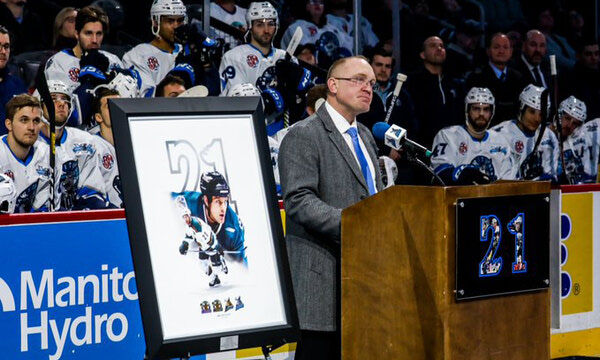 Sioux Lookout s Jimmy Roy is just the second player in Manitoba Moose history to have their number raised to the rafters at Bell MTS Place in Winnipeg after the team officially retired his number during a home game on Feb. 7.