Schools across The Northwest Catholic District School Board (TNCDSB), including Sacred Heart School, were closed on Jan. 21 after OECTA (Ontario English Catholic Teachers Association) served a notice of strike action, which outlined a full withdrawal of services in the form of a one-day strike.

OECTA said the one-day strike came after the Ford government announced a roll-back in funding for various areas. They said negotiations are currently at a stand-still.

“The Ford government announced they’re rolling back funding in various areas. One of them is class sizes and, with that, you have larger class sizes, which impairs student learning. The other thing is the e-learning. They want to start having students take e-learning courses, which is not ideal for a good portion of the students. Some students do well with e-learning, but a majority don’t. They need a teacher in the classroom and the way the structure has always been set up. We have major concerns about the funding for the kindergarten program… We haven’t even got into the wages, benefits, and things yet, but those have been the main issues so far,” said Dan Maltais, President of the Northwest Catholic Teachers unit of OECTA.

“We were in negotiations with the government two weeks ago. They broke off and the reconciliator said they aren’t going anywhere. The government really isn’t negotiating. They don’t come to the table with any proposals. They announce everything in the media and not at the table, so they’re really not bargaining in good faith. We met with them 40 times, and we’re just getting nowhere, with different proposals and different strategies,” he continued.

Minister of Education Stephen Lecce released the following statement on Jan. 21 regarding the Ontario English Catholic Teachers' Association (OECTA) one-day province-wide strike, “We fully recognize the negative impacts teacher union escalation is having on families. It is why we are calling on these union leaders to end these strikes, given the adverse effects on students and financial hardship on parents. While this union-led escalation happens far too often, we are committed to negotiating deals that keep students in class, while providing financial support for families for child care needs.”

Maltais said there could be continued strike action in the near future if the struggles and frustrations continue during negotiations.

“If this keeps up there will continue to be (strike  action), and right now we’re also on basically an administrative strike too where we’re only putting marks in the report cards, we’re not attending staff meetings, we’re not doing any government mandated PD (professional development) right now, so that could be expanded. A few weeks down the road, if we’re not back at the table and moving in the right direction, there could be more withdrawals of service,” he said. 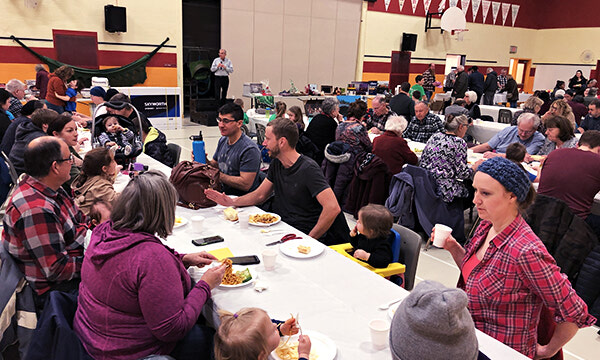 Members of the Galatians 6:10 Refugee Sponsorship Group in Sioux Lookout are thanking the community for supporting their recent spaghetti dinner fundraiser on Jan. 25 at Sioux Mountain Public School, which included both live and silent auctions.