The Thunder Bay Symphony Youth Orchestra (TBSYO) took centre stage, delighting Sioux Lookout community members with classic masterpieces and contemporary works, during a concert in the Upper Legion Hall on March 14.
The hour-long program included Mozart’s Horn Concerto, Haydn Symphony 99, Holst’s Mars, and Seitz Violin Concerto performed by Sioux Lookout resident, and violinist, Meritt Penner.
“I go to their summer camp every year. He (Thomas Cosbey) knows me because I was one of the first people that went to their summer camp in Thunder Bay… I got the piece six weeks ago, so I practiced it every day. I did a dress rehearsal in Thunder Bay and flew there by myself,” said Meritt Penner.
“It was a lot of fun,” he said.
The TBSYO does a regional tour bi-annually, which brought them to Sioux Lookout this year. The orchestra features youth musicians ranging from the age of 12-years-old up until their early 20’s.
“It’s part of our mandate to try to share our music with the region, so every two years we do a local regional tour. We try to connect with local musicians and do a small concert for the community as well,” said Thomas Cosbey, TBSYO Music Director.
“Our students start at 12-years-old, and the age range goes up to a few university students that are studying at Lakehead University. It’s a small community, so we have to draw all of the musicians to make a full orchestra. We rehearse once a week, and we do three or four concerts a year… It’s interesting to see their development over the years. It’s always a struggle for the new ones in their first year to keep up and get used to playing with other people… We try to make that transition as easy as possible,” said Cosbey.
The young musicians said they enjoyed playing in Sioux Lookout and seeing the community. They were surprised to see a turnout of over 50 people at the concert given the recent COVID-19 concerns.
“Typically the Youth Orchestra travels once a year to a different town or city each time. It was amazing, especially for me because it was my first year playing (with the TBSYO). It was a good turnout. It was nice to have so many people show up,” said Edwynn Turner, 16-year-old violinist.
“It was pretty cool. We got to see some of the town, and it was really pretty… I enjoy playing with the Thunder Bay Symphony Youth Orchestra and learning new music,” said Grace Salonen, 13-year-old cellist.
“It’s been fun. It’s always different to go to a new community and play in a different space. It was exciting… I’ve been with the orchestra for five years and it’s been fantastic. I love it,” said Gabriel Marchuk, 17-year-old violist.
“We were delighted that we had so many people turn out. We weren’t expecting it. We actually called the health unit on Thursday morning just before we left to double check and they said there was no cases (of COVID-19) yet in northwestern Ontario, so they didn’t have a problem with us continuing the tour. We were very happy to continue the tour. It was good to get this in,” Cosbey concluded.
For more information on the TBSYO, visit their Facebook page @tbsyo. 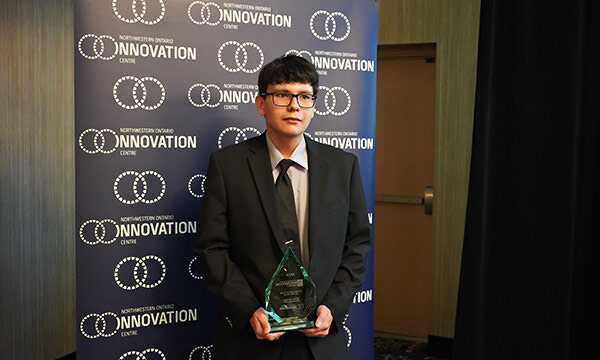 Sioux Lookout self-made blacksmith Kaden Kanakakeesic, who forges specialty knives in his own Sioux Knives shop, has been on a recovery journey since June after a fire broke out in his shop, causing him to sustain serious burns.