Theatre in the Park offers afternoon of artistic experiences

Northern Lights Community Theatre conducted a creative and unique event, Theatre in the Park, which transformed part of the Travel Information Centre’s park into a theatre for an afternoon full of artistic experiences on August 6.

Chair of the Northern Lights Community Theatre, Liz Ward said that people were able to try on costumes and read from scripts.

Brochures were provided to anyone interested in learning more about theatre.

“It has a huge list of all the different opportunities and of course our contact information, should anybody have any questions, whether they want to maybe be on stage, direct a play, or if there is a play they want us to try to do, we are always open to ideas and suggestions,” she said.

Kiera Murphy, who attended the event, said that it was really fun for her to dress up in different costumes and try on a variety of jewelry. Murphy said, “I really like the costumes, and the jewelry is my favourite.” She added, “I was going to be like, a witch, and then I saw the costume and then I wanted to be a pirate, and now I am looking for another feather so I can put it on the back of my head and kind of look like a pirate.” Ward shared her happiness to watch children take interest in the event.

Northern Lights Community Theatre is a local organization initiated by theatre enthusiasts in the community of Sioux Lookout. The group operates through community donations, and pre-pandemic, would often conduct shows to entertain people with their theatre skills, shared Ward. She added that with the group having to pause operations due to the pandemic, they wanted to remind community members through the Theatre in the Park event, of their presence and the artistic value that this community holds.

“What we have decided to do as a committee was to showcase some of the past shows that we have done over the years. With COVID, we haven’t been able to put on a production for the last two years. But we want to let the community know that we are still here and we are still thinking about doing something once the restrictions lift up that we can do, and just remind everybody about all the fun that we’ve had doing it. Maybe encourage new people to come out to help, whether they want to be volunteers, or even get up on the stage for the first time and have a try at it too,” said Ward.

Ward explained that the theatre group has no direct funders and is run solely from community support and in-kind donations. She added that the group receives support from the Municipality of Sioux Lookout to help print their posters, along with receiving community donations for most of their costumes and jewelry. Ward said that in attempts to cut costs, the group often makes their own props. “We love doing it. It’s all fun,” she said.

Ward said that the group is looking forward to safely restarting operations and bringing back their shows to offer another source of fun and entertainment to the community. 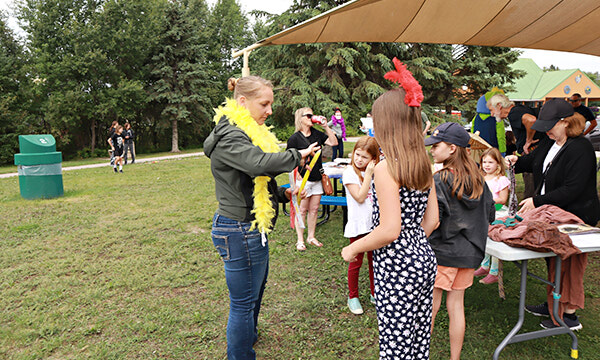 Andrea Degagne, a Sioux Lookout GSA Club volunteer, handed out freezies to children that joined in on the event spirit during Theatre in the Park, on the afternoon of August 6...